Will drop 19A if we get 2/3 majority, President tells foreign media 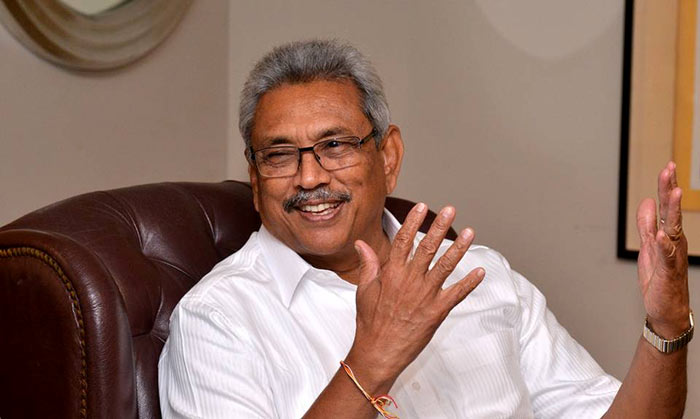 President Gotabaya Rajapaksa says he will revoke the 19th Amendment to the Constitution if he receives a two-thirds parliamentary majority on it.

The President mentioned this in an interview done with the ‘The Hindu’ during his official tour of India, his first trip as the President.

When asked if he planned to move to a more parliamentary system as envisaged by the 19th Amendment passed by his predecessor, the President said that while the transfer of powers was to be “discussed”, the 19th Amendment itself had proved to be a “failure”, and should be scrapped.

He said: “The 19th amendment (passed in 2015) is a failure and if we get 2/3rds majority in parliament we will drop it from the constitution.”

Speaking on terrorism, the President said that IS [Islamic State] is a global threat and that India and other countries have more information on this threat than Sri Lanka.

When the journalist inquired President Rajapaksa whether he promises devolution of the 13th amendment on rights for the Tamil majority areas, the President stated while the 13th amendment is part of the constitution and is functional he cannot implement some areas of it such as control of police powers.

However, President Rajapaksa said he is willing to discuss alternatives to this.

Further, promising to be ‘frank’ and ‘upfront’ to avoid the misunderstandings of the past between New Delhi and Colombo, President Rajapaksa said that India and other countries in the region must invest more in Sri Lanka if they want to provide an alternative to Chinese investment.

He also assured India that on the ‘main issues’ of Sri Lankan ties with China and Pakistan, there would be no problem ‘that creates suspicions amongst Indian authorities’.

Full text of the interview:

How do you hope to take India-Sri Lanka ties to a “higher level”, as you said here in New Delhi, and what are the priority areas?

Even during [former President] Mahinda Rajapaksa’s time we had very close relations with New Delhi, and then at the end (2014-15), it suddenly went down. And even if with the Sirisena government, they started with a very good relationship, but it ended with a lot of frustration. I would like to be consistent. I am usually very frank, so I hope to tell New Delhi honestly if I can’t do something; and if I can, then do it soon and not drag out commitments. We were successful during the previous government because we had a separate mechanism, the Troika (a 3-man coordination team) with New Delhi. We needed that mechanism because the conflict was on, and we were able to solve sensitive problems because of the close links.

Will you bring in the same mechanism for coordination again?

Well, at that time there was a necessity because of the conflict, but now I don’t think it is necessary, as we can work through the Foreign Ministries. If we are upfront and work genuinely, we will not have issues. I think the main issues India could have with us would be on [our relations] with China or Pakistan, but if we don’t do anything that creates suspicions amongst Indian authorities, there will not be any problem.

On development cooperation with Delhi, for which PM Modi announced an additional $400 million, will you honor the MoU signed by former PM Ranil Wickremesinghe on projects like the Trincomalee oil farms and Port development projects?

There are certain projects where we have to change certain modalities, and we discussed it during this visit. I haven’t studied all the projects in detail yet, but I will promise that we will expedite all the projects that are important to Sri Lanka.

You have said publicly you will renegotiate the Hambantota port agreement with China, which India was concerned about. Along with that is the future of Mattala airport, which India has shown an interest in. Now that you are in power, what will you do?

I believe that the Sri Lankan government must have control of all strategically important projects like Hambantota. After all, these are not like a hotel or a terminal, but to give control of a port or an airport or our harbors is different. With our control, they can do anything, but these 99-year lease agreements [that the previous government signed] will have an impact on our future. The next generation will curse our generation for giving away precious assets otherwise. That is why our party protested these decisions.

No, that is wrong. It is also wrong to say there was a debt trap. In fact, during our time the ports authority paid back the first installment [to Chinese banks]. The Sirisena government, on the other hand, got more money as loans and just spent it. If they were worried about the debts piling up why didn’t they first service the debt, rather than give away sovereignty?

India has also had issues with Sri Lanka’s defense cooperation China in the past, especially over the docking of Chinese submarines, when you were Defence Secretary. In 2017, you said, India had a “bee in its bonnet” on the issue. Will you be more sensitive to those concerns this time around as President?

We were sensitive to too, but the submarine issue was a simple issue overlooked by officials at the time. Warships were visiting Sri Lanka regularly, and all ships that were part of the naval piracy task force for the Arabian Sea, including Russian ships had docked there. When the Chinese asked for the submarines to be docked, officials considered it a normal port call and approved it. Former NSA Shiv Shankar Menon has written in his book that “Gotabaya gave his word that he would not do anything counter to India, and he kept his word”, so I was genuinely sensitive.

You mentioned India’s suspicions of the past, those include differences over China, and the Tamil issue, but also your allegation that Indian agencies conspired for regime change against your brother. Can your government turn the page on these past suspicions?

I am sure [we can turn the page]. We did hear about agencies conspiring, including the US, for regime change. Some of their suspicions were due to our ties with China, but that was a misunderstanding. We had a purely commercial agreement with China. I want to tell India, Japan, Singapore and Australia, and other countries to also come and invest in us. They should tell their companies to invest in Sri Lanka and help us grow, because if they do not, then not only Sri Lanka, but countries all over Asia will have the same [problem]. The Chinese will take the Belt and Road Initiative all over unless other countries provide an alternative.

What kind of cooperation on terrorism do you foresee now with India?

The threat in Sri Lanka has now changed: unlike the LTTE which was a specific threat to Sri Lanka, IS [Islamic State] is a global threat posed by terrorists across the world. India and other countries have more information on this threat than us. The previous government didn’t give much priority to security and intelligence issues. During our time, military intelligence was always the most important organization, but the last government took their [oversight] away from the military. We have now reversed that. We also hope to upgrade our intelligence as it was earlier geared towards only LTTE threats, not the IS, and we need help from India and others on this as well as on technological cooperation.

Your focus on national security also raises fears about human rights violations of the past, about disappearances and the “White Vans”, as well as worries about violence against journalists in particular. Will you give assurances that those will not return?

Those are bogus allegations, and certainly, nothing of the sort was done by me. Post-2009, we had tried to study the allegations, but it is difficult. We were not responsible, and even though we did ask the CID (Criminal Investigation Department) to investigate the charges, but they didn’t have any evidence. If it was easy, why didn’t the [Sirisena] government pursue these charges? The fact is we were strict about journalists during the war, but not in peacetime. Remember, MR’s government didn’t start the war, we finished the war. Why aren’t previous Presidents being asked about these allegations?

Last week, after Dr. Jaishankar’s visit to Colombo the Indian government issued a statement urging justice and equality for Tamils. What is your reaction?

My approach, as I told the Foreign Minister, is that it is more important to give the [Tamils] development, and better living. In terms of freedoms, and political rights there are already provisions in the constitution. But I am clear that we have to find ways to directly benefit people there through jobs, and promoting fisheries and agriculture. We can discuss political issues, but for 70 odd years, successive leaders have promised one single thing: devolution, devolution, devolution. But ultimately nothing happened. I also believe that you can’t do anything against the wishes and feelings of the majority community. Anyone who is promising something against the majority’s will is untrue. No Sinhala will say, don’t develop the area, or don’t give jobs, but political issues are different. I would say, judge me by my record on development [of North & East] after five years.

Are you promising talks on devolution or the 13th amendment on rights for the Tamil majority areas?

Look, the 13th amendment is part of the constitution and is functional, except for some areas like control of police powers, which we can’t implement. I am willing to discuss alternatives to that.

In the past as defense secretary, you led Sri Lankan forces to victory, but amidst allegations of human rights abuse, and you were accused of declining to take forward the internationally-mandated truth and reconciliation process. What would you like your legacy to be at the end of five years?

Those allegations are wrong. In peacetimes, my engagement was even more than during the war to try and work on these issues. I did demining, I worked on resettlement and rehabilitation and development, and I got all militia to disarm. Without me, there would not have been provincial council elections, which our government conducted for the first time in the North and the East. We ensured the elections were free and fair; we didn’t try to manipulate them or bring in a candidate of our choice. The international community did not recognize these things, even the Tamil politicians did not recognize these things which led to a [better situation in the North & East].

Your elder brother Mahinda is now Prime Minister, while another brother Chamal is a minister. How will the relationship with your brothers work now, and will there be a transfer of power towards a more parliamentary system as under the 19th amendment?

The 19th amendment (passed in 2015) is a failure and if we get 2/3rds majority in parliament we will drop it from the constitution. The only way you can even make the 19th amendment work is with two brothers (laughs) [at the top]. For a country to be governed successfully, you need stability.  This was not the case during the Sirisena-Wickremesinghe government, where they were fighting all the time and there was no development. Without stability, investors won’t come.

Is it true you are called the Terminator in the family?

3 Responses to Will drop 19A if we get 2/3 majority, President tells foreign media

Home » Will drop 19A if we get 2/3 majority, President tells foreign media