Women have many opportunities in Sri Lanka – PM 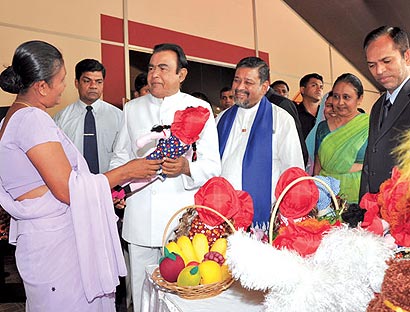 Prime Minister D M Jayaratne said that he could not accept the claim that women in Sri Lanka suffer discrimination and firmly believed that there is a reasonable environment for women to realize their aspirations.

He was addressing the International Women’s Day National Ceremony at the BMICH yesterday. It was held under the theme “her knowledge and strength to develop the nation.”

The general belief is that most women are obstructed from entering politics, but there is no legal obstruction for this as far as he knew.

He also pointed out that the Mahinda Chintana gave priority to strengthen women. Therefore the Prime Minister appreciated the decision made by the Economic Development Ministry to establish one million domestic economic units throughout the country to enhance the living strandard of families.

Many people are talking about the abuse of women, hence spiritual development is necessary to solve domestic problems, he said.

In the politics too there is women representation although the percentage is low. Therefore he requested women to come forward to increase women’s representation in politics.

Home » Women have many opportunities in Sri Lanka – PM