Words of Advice to UNHRC members wanting to remain “sovereign” 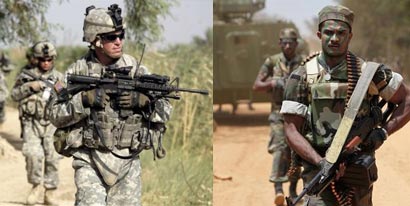 The games have begun at the UN Human Rights Council session in Geneva. More significant than the US resolution against Sri Lanka is the methods being used to target a tiny nation in South Asia. Middle East conquest by US and its cohorts is almost over; the next region will be Asia. Maldives was one such victim. There is a steady pattern in all the maneuverings taking place. The UNHRC members comprise sovereign nations of which only a handful are diehard US worshipers. UNHRC member countries must realize the logic behind any resolution where the country is minus the threat of terrorism. In such a climate Article 2 (7) providing a sovereign country to decide on matters within its own jurisdiction should apply.

The game is “military interventions” the excuse is “global war on terror” the objective is to overcome all those who oppose US hegemony and grab the natural resources of these countries to be shared amongst a handful of elite corporates in a bid to control world economy.

Do the American people know any of these details and what their taxes are being spent on?

Do American people know how many civilians US troops kill to protect America?

Do the American people know that it is a policy of the US depart of defense to  pay journalists to write positive accounts of US war efforts, ban photographers on US military bases from covering arrival of caskets containing remains of US troops killed overseas, erase journalists footage of civilian deaths in Afghanistan, invite US journalists with military units but requiring them to submit their stories for pre-publication & refusing to disclose statistics on civilian casualties?

The global war on terror (rather military intervention) started with Afghanistan & Iraq, Egypt, Bahrain, Yemen, Libya, Jordon soon followed. Earmarked countries are Iran, North Korea, Syria & Venezuela. With no nation to really threaten the US it has been easy to conquer, occupy & exploit. Countries have to succumb to either armed aggression or intervention in the form of “cooperation agreements”. How far the Declaration against Foreign Military Bases actually succeeds depends on international solidarity. As with the current need for members of the UNHRC to look upon the greater meanings behind the nations that forward Resolutions!

We next come to Asia. We are aware of US presence in Pakistan. We are also aware of Pakistans change of stance & present alliance with Iran. Then there is India unable to decide which foster mother to go to resulting in the entire South Asian region like to suffer. What the UAE did to the Middle East, India is likely to do to Asia.

There is no doubt that the US is returning to Asia after its military preoccupations in the Middle East. Thus, China has every right to doubt India’s ties to the US. The US certainly seeks to tie its allies closer to counterbalance China’s rise & expansion drives. Upto 2500 US Marines will be deployed in Australia.

Maldives became the latest casualty after India did the groundwork for the US. A US-inclined puppet Government prevails in Maldives.

Unlike the 1st phase of US military interventions in Asia where countries were ruled by dictators most Asian countries today are practicing democracies but all suffering some form of corruption and blunders in public administration. This has enabled US to use methods of intervention through UN using a variety of its bodies that serve to engulf these naïve nation politically, socially and economically – with even military presence not necessarily of the type present in the Middle East. Many of these nations have thought it a pleasure to have US military personnel in these countries not realizing the greater implications of their presence.

For dictators the strategy was military intervention, for Asian democracies the US will be using humanitarian intervention citing grave human rights violations or issues relating to “accountability”. US’s own human rights record does not come into debate and neither does the US respond to any allegation against its wrong doings. Can nations and leaders expect to achieve unbiased and mutual agreements with such a nation?

US realizing India’s lethargy & indecisiveness on account of Tamil Nadu has obviously decided to take Sri Lanka into its own hands. Thus, the robust US manoeverings upon Sri Lanka surprising perhaps even India which is faced with a dilemma on whether to vote for or against the resolution brought by US against Sri Lanka.

Let’s just ponder. All the nations of the world knew Sri Lanka was faced with a problem since 1983 – whatever different parties termed it, no one could deny that the LTTE was carrying out tremendous acts of terror across the nation. The killings had no rationale – Sinhalese, Muslims even Tamils were killed, academics, public servants, children, pregnant women, passengers & commuters, villagers, VIPs & political leaders & even LTTE members were all targets. These were terror acts that could never be solved through discussions despite 5 such attempts over 30 decades where Sri Lanka’s governments were coerced into believing in peace talks which invariably resulted in more or less signing parts of land areas that came to be referred to as LTTE controlled areas.

There are no wars without civilian casualties. Following a policy of zero civilian casualty does not mean there are likely to be no civilian deaths. Civilians’ dying does not equate to mean that the Government has lied about civilian deaths and we ought to attribute all deaths to the Government. What we need to understand is that the Government did not give orders to kill any civilians. This is extremely important and this is what differentiate Sri Lanka from the US where clear orders have been given “to kill everything that moves” (Vietnam & even in Iraq).

Having achieved what the US & its allies thought impossible, Sri Lanka has entered history books as being the only country to militarily defeat an internationally accepted terrorist organization. When foreign nations did not stop LTTE from murdering innocent people and the present Government ended 30 years of terror in just 3 years, when the country is experiencing peace – what does the US expect to achieve? It was only a month after submitting the LLRC report for reconciliation that the US notified of its resolution at the UNHRC.

Therefore it is undoubtedly clear that Asia’s next victim is likely to be Sri Lanka and UNHRC members need to look at the broader significance of US in Asia, Latin America & Middle East and wisely decide to not be part of an agenda that is likely to be the start to the end of humanity.

Sri Lanka is exerting its right as a sovereign nation and Sri Lanka appeals to members of the UNHRC to not be part of a US-sponsored nexus to militarily takeover these nations, deploy its troops, deploy its personnel and make virtual slaves of its citizens or arm them and entice them to kill each other as is being done in Middle East & Africa.

Sri Lanka is not asking any favors. All we ask of UNHRC member nations is to vote with their conscience for there is no rationale to the actions US & it’s selected allies make. Those thinking themselves as allies will face the fate of Iraq & Egypt sooner than later.