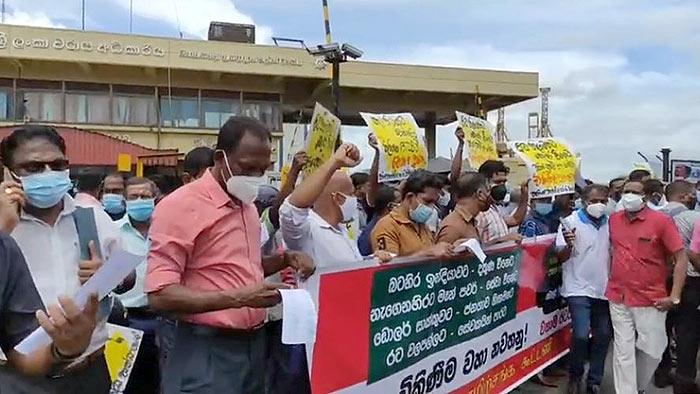 The joint alliance of trade unions of electricity, ports and petroleum services launched a series of protests today (03) challenging the selling of national resources.

The main demonstration of the protest series consist of 35 trade unions were seen gathered in front of the Ceylon Electricity Board (CEB) head office in Colombo this afternoon (03) opposing the Government’s decision to sell 40% of the shares to New Fortress Energy Inc., and against the handover of the country’s Liquefied Natural Gas (LNG) monopoly to the US company.

However, although all the leave of the employees was canceled, the united trade union alliance has ignored the relevant circular and decided to participate in the protest.

The trade unions are urging the government to scrap the agreement executed with the United States-based New Fortress Energy Inc. on the Yugadanavi Power Plant in Kerawalapitiya.

They have assured that there would not be any power outages in the country despite their protests.

CEB Chairman M.M.C. Ferdinando meanwhile said it is a breach of discipline if the employees do not take part in emergency maintenance work in the event of any breakdown by attending the protests.

The employees of Colombo Port also engaged in protests at the clock tower opposite the Port against the handover of shares to the American company New Fortress Energy Inc., today (03).