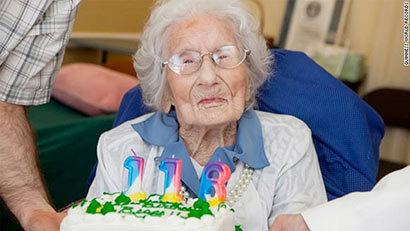 The US woman listed as the world’s oldest person has died. She was 116.

She had recently been ill with a stomach virus, he added.

The Tennessee-born teacher had had her hair set on Tuesday morning and watched a Christmas video, but then suffered breathing problems, said Mr Cooper. She was put on oxygen but died a short while later.

“With her hair fixed it looked like she was ready to go,” Mr Cooper told the Associated Press news agency.

Ms Cooper was certified by Guinness World Records as the world’s oldest person in January 2011.

The following May, Guinness discovered that a Brazilian woman, Maria Gomes Valentin, was 48 days older, but she died the following month.

Born in Tennessee, Besse Cooper moved to Georgia during World War I to look for work as a teacher.

Her funeral was likely to be held later this week, her son said.

Guinness said Ms Cooper is succeeded as the world’s oldest living person by fellow American Dina Manfredini from Iowa, who is 115.

The oldest person ever was French-born Jeanne Calment, who lived to be 122 before dying in 1997.