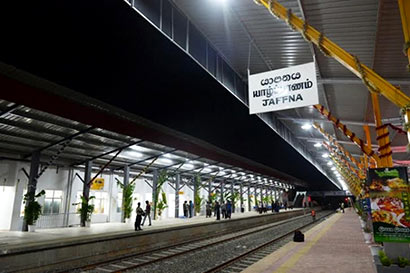 Yal Devi, which is currently running between Colombo and Palai, will be extended to Jaffna from today (13) under the patronage of President Mahinda Rajapaksa.

Meanwhile, the Jaffna Railway Station will be unveiled by the President. The Jaffna railway station will feature many modern facilities including novel communication electronic signal system.

The four crossing stations between Palai and Jaffna located in Kodikamam, Chavakachcheri  and  Navatkuli will be also opened by the President.

Perhaps it is the culmination of development programs related to road and rail transport, infrastructure and connectivity between the North and South.

Previously the government was succeeded to restore a section of the lines of railway from Vavunia to Palai after the end of war.

The India Railway Construction International (IRCON), an Indian railway subsidiary, has now completed the restoration of the railway lines from Palai to Jaffna and the government will be run the train from Jaffna to Kankasanthurai soon.

Minister of Transportation Kumara Welgama, officials of railway department and government officials will be participated to this event.