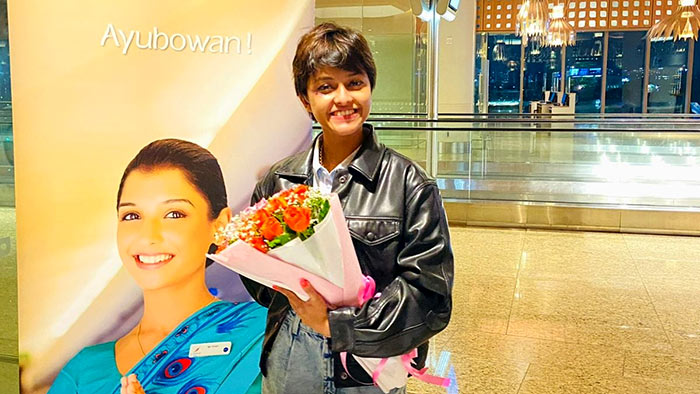 Sri Lankan singer Yohani who became popular in many countries around the world, returned to the country after taking part in several concerts in India.

She arrived at the Katunayake International Airport from Mumbai at 11.25 last night (12).

“The Indian people know about Sri Lanka but do not know that there is a language called Sinhala. When I sang a song in a language that those people had never heard of, it became extremely popular all over India as well as across the world. I attended several concerts in New Delhi, Hyderabad and Mumbai. There was a very good response from the people. I’m very happy about that,” she said.

When she went to India, she was lucky enough to meet Jacqueline, a beautiful actress of Sri Lankan origin, and Salman Khan, a veteran Bollywood actor.

This is how SriLankan Airlines welcomed her.

After completing an extremely successful tour in India, we are happy to welcome @yohanimusic Yohani back onboard with us to bring her back home! #yohani #ManikeMageHithe #music #SriLankanAirlines #India #SriLanka #iflysrilankan pic.twitter.com/yQK62hjGXr

Addressing the media at the airport, she said her next hope is to present an album of twelve Sinhala songs. Singer Yohani de Silva added that most of the work has been done on the album by now.