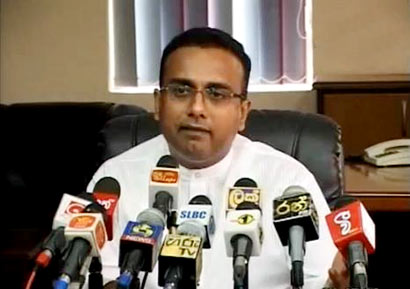 The no-confidence motion against Prime Minister Ranil Wickremesinghe with 110 signatures of opposition members including ministers, state ministers and deputy ministers was to be handed over to the Speaker Chamal Rajapaksa last afternoon despite attempts by the government to thwart it, UNP Parliamentarian Manusha Nanayakkara said.

The Galle District Parliamentarian currently aligned with the SLFP representing a group of lawmakers of the SLFP urged President Maithripala Sirisena to form a UPFA government under the premiership of opposition leader Nimal Siripala De Silva to complete the remaining work uncompleted in the 100-day programme before the dissolution of Parliament.

“We have collected 110 signatures for the No Confidence Motion against Prime Minister Wickremesinghe and we hope to hand it over to Speaker Rajapaksa on his return from Tangalle where he is attending a few official functions this afternoon or tomorrow morning,” he told a media briefing at the office of the Leader of the Opposition yesterday.

“What we want is to debate the no confidence motion against Mr. Karunanayake which is already in the order paper or to take up the debate on the no confidence motion against Mr. Wickremesinghe which we expect to hand over today to Speaker Rajapaksa as early as possible and topple this government. If the President thinks that the move will scuttle his attempts to pass the 20th Amendment to the Constitution, he can form a UPFA government under opposition leader Nimal Siripala De Silva to fulfill the pledges given under the 100 day programme that includes electoral reforms. The UPFA will support fully to pass electoral reforms in Parliament,” he stressed.

“We want early elections to form a UPFA government. But we are ready to support President Siriena to pass the 20A before the polls if he desires so,” he added.

He said the opposition was confident that it could garner a minimum 120 votes in Parliament in support of the no confidence motion against Mr. Wickremesinghe and thereby topple the government.

The Rajapaksa regime was rejected by voters as there were mistakes and misdeeds under that regime. But the UPFA government to be formed under former President Mahinda Rajapaksa would be a reformed one sans corruption, mismanagement, thuggery and misrule, Mr. Nananayakkara stressed.

Ratnapura District UPFA Parliamentarian, Janaka Wakkumbura said political victimization of state and private sector employees had taken place in an unprecedented level and more than 100,000 employees have been fired on political grounds in the private sector alone since this government came to power.

“The development projects launched by the Rajapaksa regime round the country have ground to a halt and as a result the development is in a standstill. Rubber and tea small holders are in dire strait as they do not get even the production coast of their produces. Employees in the public sector have been fired, demoted or transferred on political ground,” Mr. Wakkumbura charged.

Former Lake House Chairman Bandula Padmakumara said journalists in large numbers have lost jobs under this government and he himself lost the job on political victimization.

They said those who were subjected to political victimization under the government could complain to : the Coordinator, ‘No Tears Please’, D 15, MPs Housing Scheme, Madiwela to obtain relief under a future UPFA government.