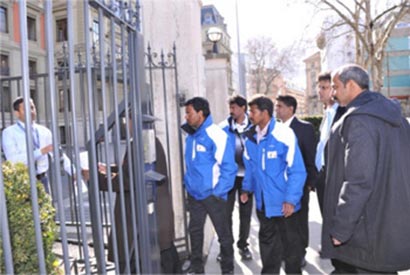 PHOTO: A group of Tamils hand over a petition to the office of the UN High Commissioner for Human Rights Navanethem Pillay.

Thousands of Tamils from across Europe protested in front of UN headquarters in Geneva Monday demanding the creation of an international tribunal to try alleged “war crimes” committed in Sri Lanka.

Some 2,000 protestors, according to the SDA-ATS Swiss news agency, waved banners and placards in favour of self-determination for the Tamil minority and denounced “genocidal acts”.

“We have proof of war crimes. We demand justice,” declared some placards, while others demanded that Sri Lanka publish its “list of 18,000 prisoners”.

The protestors paid tribute to victims of the civil war that claimed tens of thousands of lives and ended in 2009 when the Liberation Tigers Tamil Eelam (LTTE) were forced from the north and east of Sri Lanka by the army.

The demonstrators were also demanding that the UN Human Rights Council, meeting until March 23 in Geneva, adopt a resolution on Sri Lanka.

At the previous session in September 2011, the council had deferred its decision pending the outcome of investigations by the authorities in Colombo.

“Three years have passed since the Sri Lankan government announced the end of armed conflict, but to date there have been no steps taken towards a permanent political solution to match the aspirations of the people of Tamil Eelam,” said a statement from the Coordinating Committee of Tamils in Switzerland.

The Tamil associations called on UN member countries to open “an independent international investigation into the systematic genocide of Tamils by successive Sinhalase governments” in Sri Lanka.

The association also wants the withdrawal of the army from north and east of the island, the holding of a UN organized referendum and the right to self determination of Tamils.

They were also demanding a general amnesty for political prisoners and for their immediate release.

Early in the session of the Human Rights Council, the United States announced its intention to file a draft resolution to support “a process of true reconciliation” in Sri Lanka.

Washington wants Colombo to agree to take measures to fight against impunity.

The Sri Lankan government has said, however, it rejects outside interference, AFP reports.

8 Responses to 2,000 Tamils stage protest at UN in Geneva