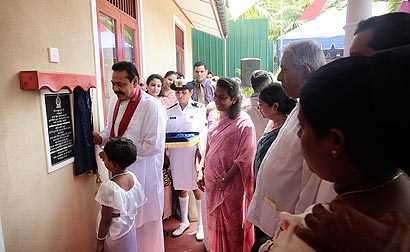 Another twenty seven (27) new houses constructed under the Second Phase of Api Wenuwen Api housing programme were ceremonially handed over to the war heroes and their families by President Mahinda Rajapaksa (today) on 5th September at Thorayaya in Kurunegala.

To mark the occasion, President Rajapaksa handed over the first key of those houses to the widow and children of a fallen war hero of Sri Lanka Navy, Officer T.M.R.K Tennakoon who made his utmost sacrifice for defending the motherland while serving in the battle front in 2007.

Twenty five (25) houses were completed as the first phase of this Ranaviru housing project in Senerathgama in Kandy on 11 July 2010. President Rajapaksa handed over the keys of all these houses either to war heroes who were rendered disable or to widows and children of the fallen war heroes.

The ‘Api Wenuwen Api Fund’ is a collaboration between the Ministry of Defence and the Central Bank of Sri Lanka to build 50,000 houses for the serving Three Forces personnel in Sri Lanka. However Ministry of Defence launched this particular housing project to construct 700 housing units island-wide for the war heroes. Third and the fourth phases of this program have already started in Hambantota and Matara districts. Fifth phase will be commenced in the Moneragala district soon. Construction of 12 more Ranaviru houses in Kurunegala district is also in progress.

Many Sri Lankans, especially living in abroad have contributed to this Ranaviru housing project. Every cent received for the fund from the public is utilized to construct houses. The fund was only used to buy the materials for the constructions. The labour is provided by the Three Forces. The whole project is conducted under the guidance and close supervision of the Defence Secretary Gotabaya Rajapaksa.

Contributions can be made to the Api Wenuwen Api fund to the following Account Numbers. 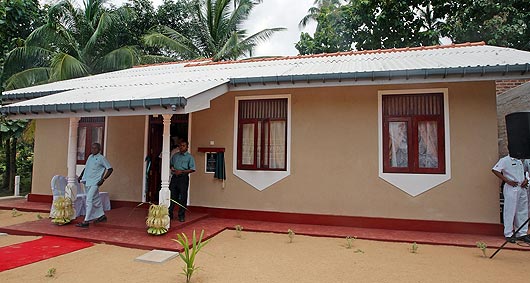