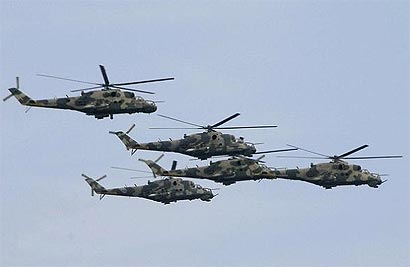 Sri Lanka Air Force (SLAF) today celebrates its 60th anniversar falls on March 02, 2011. The main anniversary celebration was held at its Ratmalana Air Base with Commander in Chief, President Mahinda Rajapaksa as the Chief Guest. The Sri Lanka Air Force which was initiated by the British 60 years ago has turned out to be a highly professional Force true to its name by adopting the latest techniques.

When at last training got under way at Katunayake, the first batch of Officer Cadets were Ivor De Abrew, L B Tissa, R Varatharasa, C Chelvarajan, Mike Phoebus, D Nicolle, Dick C Perera, R Vivekananthan, Harry Goonetileke and Jayasena. An Air Force HQ Unit was formed in 1952 and was located at McCallum Road.

At inception, the RCyAF owned no aircraft. The RCyAF’s first trainer, the Chipmunk arrived in 1950 and another two batches joined the fleet in 1952 and 1953. The aircraft were assembled at Katunayake, under the guidance of RAF Engineers and were first flown in February 1951.

Many an RCyAF Cadet pilot found the next batch of Balliols brutes to fly yet a few of those Cadets like Paddy Mendis, Harry Goonetileke and Dick Perera have admitted that of all the aircraft they had flown, the most challenging and rewarding to fly, were the Balliols.

The RCyAF took delivery of Merlin-engined Boulton Paul Balliol aircraft in 1955, heralding the commencement of advanced flying training activities, long delayed up to that juncture. But the prowess of our young RCyAF pilots did Ceylon proud in the UK. Squadron Leader S V Mahendra Situnayake became the second Asian pilot to win the Groves Memorial Prize for Flying and Airmanship at Cranwell while Squadron Leader J E M Nihal Ratnayake became the first Asian pilot to win the Hicks Memorial Prize for Aerobatics, also at Cranwell.

The RCyAF’s first major tragedy took place in 1958 in the form of an air accident. It involved a Dove aircraft from No 2 Squadron piloted by Flt Lt Varatharasa which crashed on take-off into the oil storage tanks at China Bay airfield in the Trincomalee area, killing all five persons on board. In addition to the pilot, there were Flt Lt Shibley and Lt Peiris and an Engineering Officer of the British Army, Major Hacker and Sergeant Guy.

The Civil side of things

The first signs of civil unrest in Ceylon was witnessed in 1958. The RCyAF was called upon to assist the other armed services in maintaining law and order.

Air Vice Marshal John Lindsay Barker relinquished command of the RCyAF in 1962 and bade Ceylon farewell and Air Commodore E Rohan Amarasekera DFC took over it as the first Ceylonese Commander of the RCyAF.

Air Cdre Amarasekera introduced the official language, Sinhala, into the day to day working of the Force.

RCyAF Trade Training School, Katunayake, came into being to provide formal training for Officers and Aircraftsmen in their branch or trade on January 15,1971.

The No 1 Flying Training School which went to China Bay in 1963, was re-established with effect from January 15, 1971 to undertake ab-initio and advanced flying training of students to wings standard. It also handled the training of qualified pilots to Flying Instructor category and the standardisation of Flying Instructors and Pilots of the RCyAF.

The RCyAF at the outbreak of the Southern-led insurgency in the island in 1971 which was the first serious internal threat faced by Ceylon, five Jet Provosts were flown to Katunayake from China Bay attacking a target on the way on April 9. With the hurried purchase of 60 lb rockets, the Jet Provosts became an effective weapon against insurgent concentrations.