State Media should apologize to Mahela and Thilan – Herath 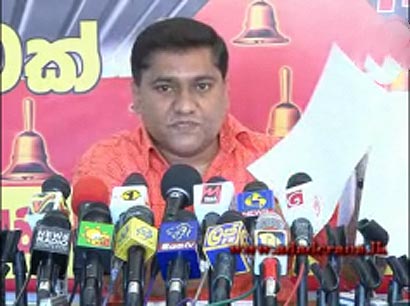 The state owned ITN should apologize to Mahela Jayawardena and Thilan Samaraweera for running a segment suggesting that they were involved in match fixing which caused Sri Lanka to lose to Pakistan last Saturday, JVP MP Vijitha Herath stated.

He further stated that the JVP strongly condemns the accusations hurled at the two cricketers and demanded that the ITN script writer Mahinda Abeysundera apologize to the cricketers for claiming that they underperformed for financial gain.

Herath further claimed that the government was attempting to sell government and public property on D.R. Wijeywardena Mawatha to foreign parties who aim to build casinos on the land. He alleged that the President had already approved the proposal and it was pending cabinet approval.

Home » State Media should apologize to Mahela and Thilan – Herath