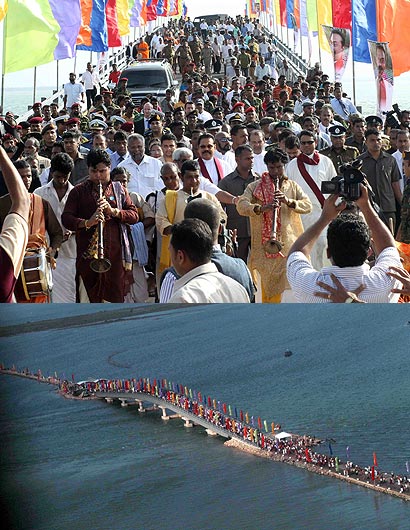 A much waited Sangupiddy dream bridge which links the Northern peninsula to the rest of the country via Pooneryn declared open by President Mahinda Rajapaksa yesterday on 16 January. The Sangupiddy Bridge across the Jaffna lagoon connects Pooneryn from the mainland and Karaitivu in the Northern Province.

The Tamil Tiger terrorists who controlled the area blasted the bridge before their defeat decades ago. It caused huge disruption to the people in north of Sri Lanka. Before its destruction, thousands of people used the bridge daily. The government started the reconstruction of the bridge soon after the complete defeat of brutal terrorism in May 2009.

Sangupiddy Bridge was constructed under the “Uthuru Wasanthaya- Wadakkil Wasantham” (Northern Development Project) for the Northern Province at a cost of 1.3 billion rupees. The bridge is 288 meters long with two lanes. It took eight months to construct and the British government provided a soft loan. With the opening of the new bridge there will be two land access routes to the Jaffna Peninsula and after decades it is a dream comes true for thousands of people who used the bridge daily.

The Sangupiddy Bridge that connects the A-32 road from Mannar to Jaffna across the lagoon is the shortest land route to Jaffna from Colombo. The distance of travelling to Jaffna will be cut by 120 kilo meters than the way through the main A-9 Jaffna-Kandy Highway. It will also be possible to cut the traveling time by three hours. The bridge is also expected to assist the reconstruction and future development of areas in the North. In parallel to the construction of the Bridge, the Pooneryn-Jaffna and Puttalam-Mannar roads are also being reconstructed under the direct supervision of President Mahinda Rajapaksa. 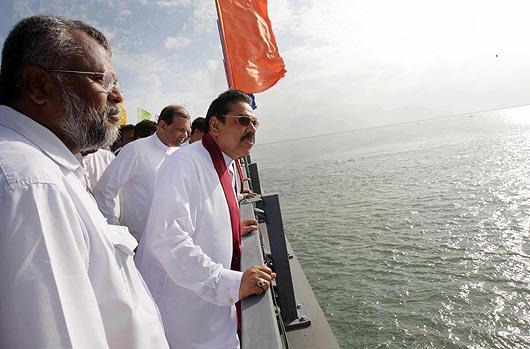 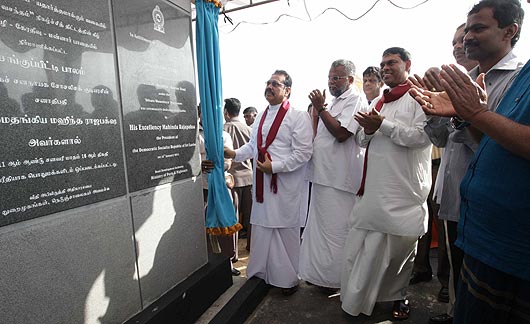