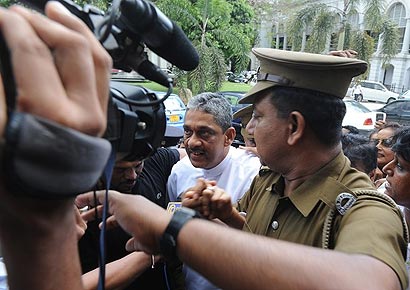 He made these comments while leaving after the hearing of the white flag case was postponed yesterday.

Meanwhile, Mrs. Anoma Fonseka said the case was getting postponed every day.

“But we hope that the courts will grant justice, because we cannot seek justice from anywhere else. And we are convinced that it would not be granted elsewhere,” said Mrs. Fonseka.

“Day after day, there are more and more cases. There’s also a serious issue on his security. One day there were problems here with regard to his safety.

“Even today, we see complete outsiders here. We earnestly request that adequate protection be provided,” said

4 Responses to A HILARIOUS BUDGET, FEW SOLDIERS HAVE A THIRD CHILD: SARATH FONSEKA