A Nation Betrayed Looks At Maithri’s Next Move 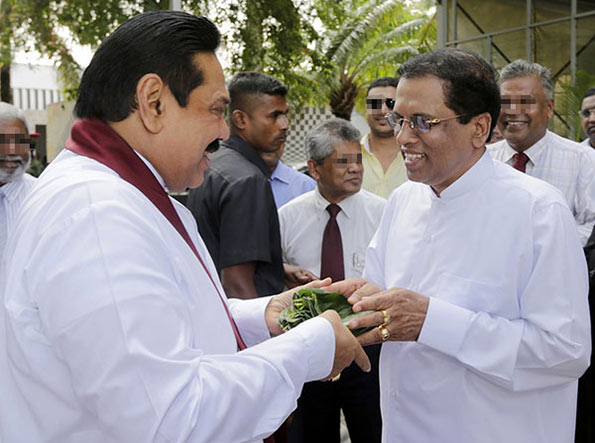 President Maithripala Sirisena, in his effort to prevent a split in the SLFP led by him, has inadvertently weakened the party like never before. Not to mention the severe blow dealt to the foundation of good governance, a policy he preached in the run up to the Presidential election.

Sirisena, who pledged a change in the system that existed during the former Mahinda Rajapaksa regime, has once again endorsed the return to the same scenario, by giving a green light to Rajapaksa and his clan to contest at next month’s general election.

After claiming the threats faced by him and his family had he failed to secure victory at the January 8 Presidential election, the fact that Rajapaksa’s resurgence to power may only be a bullet away seems to have evaded Sirisena.

The decision to grant nomination to Rajapaksa, and a majority of his loyalists facing many allegations ranging from corruption and fraud to murder, has now left the President in isolation. The forces, including most of the SLFP members, who joined him during the 2015 Presidential election campaign, have now abandoned ship. Only SLFP Minister Duminda Dissanayake has decided to remain in the SLFP as a pro-Sirisena member. The rest have decided to distance themselves from the unholy MS-MR alliance.

“How can I sit on the same platform with Mahinda after campaigning for his defeat just a few months ago? Even if I’m to be defeated at the elections, and even if I’m sitting at home, I will not participate in party rallies attended by Rajapaksa,” a Sirisena loyalist said, in disgust, last Friday (10).

Despite assurances given by Sirisena to his supporters that he would make a drastic change after the conclusion of nominations tomorrow (13), there is little confidence among them that the President could actually make an impact given the depth he has fallen where public perceptions are concerned.

In fact, even pro-Rajapaksa elements started to feel the possibility of the UPFA being defeated at the general elections by Friday.

Although claims have been made that Sirisena would lead the UPFA general election campaign, Sirisena has so far indicated that he would distance himself from the pro-Rajapaksa group and make public his stance on individuals facing various allegations.

Be that as it may, Sirisena,who boasts of being in politics for several decades, is definitely aware that the sword of Damocles is now hanging sharp above his head.

The role played by Yapa and Premajayantha was critical in securing nominations for the pro-Rajapaksa group. They firmly maintained that the UPFA nominations list will include Mahinda Rajapaksa’s name and all former parliamentarians of the UPFA.

After expressing her displeasure at Sirisena’s decision and listening to his reasons behind the decision, Kumaratunge explained the dire need to prevent any corrupt elements from being granted nominations from the SLFP.

By then, Kumaratunge had already held a discussion with the newly formed alliance of the JHU called the United National Front for Good Governance with its symbol being the gem stone.

She presented to Sirisena a proposal to set up an alternative alliance against the pro-Rajapaksa faction together with Sirisena loyalists and the JHU’s new alliance.

Kumaratunge, along with members of the JHU alliance, also held a round of discussions with the UNP to explore the possibility of forming an alliance that would contest separately from the UPFA at the general elections.

The UNP was positive on forming a coalition government with the alliance after the elections since the UNP had already dismissed proposals to contest through a broad alliance under the swan symbol.

The plan of the alternative alliance was to isolate Rajapaksa and his group of undesirables and confine them to the UPFA. Sirisena loyalists saw this option as the only way to overcome the humiliation of supporting the same forces they fought to defeat.

President Sirisena and Kumaratunge were expected to spearhead the campaign of the proposed alliance. It was the view of many that such an alliance would help safeguard those who voted for Sirisena at the Presidential election without feeling betrayed.

Be that as it may, the plan that was expected to be announced last Monday (6) had to be shelved at the last minute since Sirisena did not agree with it. He felt such a plan would bring about a sure split in the SLFP. Hence, he objected to the proposal and continued to push for a consensus among his loyalists and the pro-Rajapaksa group.

Displeased with the situation, Kumaratunge decided to give up her battle. She indicated her decision to several Sirisena loyalists, who insisted that she should not give up.

It was then that Kumaratunge informed them that she has planned to leave for London on Thursday (9). The immediate question from the others was whether she was going to be back during the election campaign. Kumaratunge had smiled and said she would return in about a week’s time.

However, before leaving, Kumaratunge, along with Rajitha Senaratne, Duminda Dissanayake, M K A D S Gunawardena and Arjuna Ranatunge, met with Sirisena on Wednesday (8) to finalize the UPFA nominations lists.

Although the meeting commenced on a positive note of eliminating from the UPFA national list a group of members in the pro-Rajapaksa group facing various accusations, a final decision could not be reached on the matter.

Interestingly, at the time the President was having a discussion with his loyalists, another meeting was taking place in Colombo 7.

The meeting was between former First Son and MP Namal Rajapaksa and the general secretaries of the SLFP and the UPFA.

Although details of the discussion were not immediately available, it was later learnt that the discussion was based on the black list that contained the names of a group of Rajapaksa loyalists who were not to be granted nominations.

The pro-Rajapaksa group was also preparing themselves to contest separately if the UPFA does not grant nominations to them. Several options were considered to form an alliance to pave the way for Rajapaksa’s return to politics.

The decision on the nominations list was finally postponed till Thursday (9) morning. The groups that have engaged in discussions, in the past few weeks, once again, made their way to the Presidential Secretariat, mostly disgruntled with the indecisive nature of the situation.

Kumaratunge, and the SLFP seniors who backed Sirisena during the last Presidential election, had, by then, presented a list of SLFPers who are facing various accusations and who should not be granted nominations under the UPFA.

A tug o war had commenced between the Sirisena faction and the Rajapaksa faction over the names in the list.

Rajapaksa insisted on the inclusion of Prasanna Ranatunge and several other members in his “core group” in the UPFA nominations lists.

However, there did not seem much canvassing among the Rajapaksa group to secure nominations for Duminda Silva, Sajin Vass Gunawardena and Mervyn Silva. The exclusion of their names from the nominations list then created a discussion on the basis on which they were identified as not deserving to receive nominations when others facing similar accusations were to be given the green light to contest at the election.

It is at this point that Duminda Silva posed a question on the basis on which he was being deprived of receiving nominations. He noted that he was also being accused of various allegations that have not been proven in a court of law. He added that there were many other politicians who had faced similar allegations, but were being given nominations by the Alliance.

Another former UPFA MP in the black list was Sarana Gunawardena. However, the UPFA reached a compromise with him. The decision was to give nominations to his wife instead of him. This along with the granting of nominations to a former UPFA MP currently in remand custody resulted in a group of Duminda Silva’s supporters holding protests on Friday (10) outside the SLFP headquarters and the Mahaweli Center where UPFA nominations were being signed.

By Thursday (9) evening, members of the pro-Sirisena group were beginning to feel more disappointed mainly due to Sirisena’s stance.

The fact that both Anura Priyadharshana Yapa and Susil Premajayantha had already sided with the Rajapaksa faction made them realize that the SLFP would not stand a chance of winning at the next general election.

Going by the calculations, district wise, the pro-Sirisena SLFPers realized that it would be daunting task for the SLFP to record a victory at next month’s election.

The likes of Rajitha Senaratne, M K A D S Gunawardena, Arjuna Ranatunge and Duminda Dissanayake realized that they needed to find an alternative method to continue to stand by the policies pledged by them during the last Presidential election.

Dissanayake felt that he could not isolate Sirisena or the party at a time of crisis. The President quickly addressed several long standing issues faced by Dissanayake in the Anuradhaoura District. Dissanayake was appointed as the organizer of the Kalawewa electorate, which was formerly held by his father, the late Berty Premalal Dissanayake.

Dissanayake’s next move was to call for a change in the district leadership. Sirisena agreed to the request, thereby removing one of Rajapaksa’s henchmen, S M Chandrasena, from the post and appointing Tissa Karaliyedda as the new SLFP district leader.

However, Senaratne, Gunawardena and Ranatunge decided not to contest from the UPFA at the next election.

The trio decided to form an alliance with the JHU’s United National Front for Good Governance and contest together with the UNP under the elephant symbol.

It was also rumored on Friday (10) that the Democratic Party led by Field Marshal Sarath Fonseka would also join the UNP alliance. It was further stated that Fonseka would contest the election from the Kurunegala District against UPFA’s Mahinda Rajapaksa. If that were to be, it would be a déjà vu situation where people will once again be drawn back to the Presidential election of 2010.

Nevertheless, Fonseka, by Friday (10), did not confirm such a move. He said his party had not joined any alliance and that it would contest separately.

By Friday (10), the strength of the UNP saw a drastic increase. The SLFP and the alliance of Tamil political parties led by Mano Ganeshan announced that they will contest together with the UNP under the elephant symbol.

The news that Senaratne, Gunawardena, Ranatunge and the JHU would also contest under the elephant symbol made the rounds on Friday evening, reinforcing the growing momentum of the UNP.

It was later revealed that around 18 UPFA candidates had withdrawn their candidacy from the Alliance and joined the UNP for the elections.

The UNP was once again feeling confident of forming the next government after elections.

The grand convention planned by the UNP at Campbell Park in Borella on Saturday (11) was a show of strength that the green brigade has risen and was ready for action.

Home » A Nation Betrayed Looks At Maithri’s Next Move