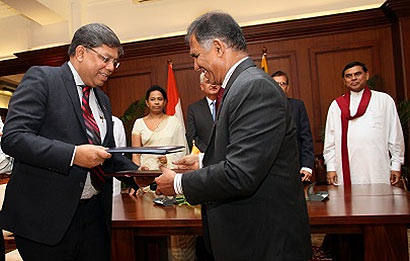 Further strengthening the ties between India and Sri Lanka, the agreement was signed for the proposed  Sampoor coal power station in Trincomalee Monday (7) at the Presidential Secretariat in Colombo.

The initial discussions regarding the commencement of the Sampoor Coal power project was initiated during the visit of President Mahinda Rajapaksa to India in 2005.

The Sampoor Coal power project which was stalling due to various issues that arose, was expedited by the present Minister of Power and Energy Attorney Pavithra Wanniarachchi, under the instructions of the President and the guidance of the Minister of Economic Development Basil Rajapaksa.

The Sampoor Coal power station will comprise two 250 MW power generators. The power generated will be transported through high voltage transmission lines from Sampoor through Habarana to Veyangoda Sub Grid Station and connected to the National grid.

The administrative functions related to the Sampoor power station will be managed by the Trincomalee Power Company which is a joint venture between the CEB and India’s  National Thermal power Corporation.