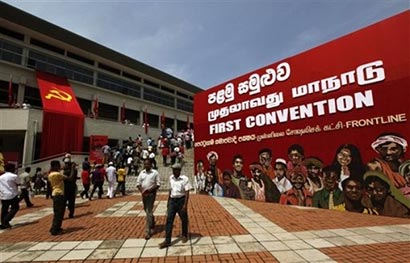 Leader of the newly formed Frontline Socialist Party (FSP), Australian national, Premakumar Gunaratnam who had been living in Australia under the false name, Noel Mudalige, was yesterday deported to Australia with the concurrence of the Australian High Commission in Colombo. He had walked into the Colombo Crime Division Headquarters at Dematagoda on Tuesday night, claiming that his abuductors had released him near that place.

His party said on Sunday, he had been abducted from a house in Kiribathgoda.

Representatives of the Australian High Commission accompanied Mudalige to the Bandaranaike International Airport after the police recorded a comprehensive statement from the Australian passport holder in the presence of Australian diplomats. He told the police that his abductors had extensively questioned him on his party’s future plans.

External Affairs Minister Prof. G. L. Peiris yesterday alleged that the FSP had made a deliberate attempt to embarrass the government as part of a malicious attempt to discredit it.

Responding to The Island, a few hours after Mudalige left for Australia via Malaysia, Prof. Peiris said that it was unfortunate that whenever a person had withdrawn from society for personal reasons, or gone underground deliberately to cause embarrassment to the government, an accusing finger was pointed at the administration.

The External Affairs Ministry yesterday wrote to Colombo-based embassies detailing the circumstances under which Mudalige had walked into the Colombo Crime Division (CCD) at 10 p.m. on Tuesday and Ms. Dimuthu Attygalle had been released several hours later. Strongly denying government involvement in the double abductions, Prof. Peiris said: “The objective of the operation is clearly to target the country in international fora on the flimsiest of evidence. This has happened on many occasions and now seems to reflect a recurring pattern.”

In a brief missive sent to embassies, the External Affairs Ministry alleged that Gunaratnam (original name) had changed his name at least three times. Gunaratnam had married as Wanninayake Mudiyanselage Daskon, according to his marriage certificate. He had obtained a Sri Lankan passport under the name Rathanayake Mudiyanselage Dayalal and then another passport from Australia under a different name, which he produced on Sept. 4, 2011 at the BIA.

Commenting on the circumstances, in which the missing duo re-appeared, Prof. Peiris pointed out that according to a complaint received by the police, Mudalige had been abducted at 4.00 a.m. on Saturday (7), though a complaint was lodged at 4. 10 p.m after a lapse of 12 hours. Strangely, the alleged abduction of Attygalle, allegedly carried out at 8.00 p.m. on Friday (6) hadn’t been reported at 3.35 p.m the same, just 30 minutes before Mudalige’s disappearance was brought to the notice of law enforcement authorities, Prof. Peiris said.

Defence Secretary Gotabhaya Rajapaksa told The Island that Mudalige would never have walked into the CCD headquarters if he had been really abducted and interrogated by some government agents at a secret detention facility. He urged those who had accused the government of abducting the duo to ask the deported Australian citizen to explain his decision to seek refuge at a police station. Had he rushed to his colleagues or waited till the following day to seek protection at the Australian High Commission, people would have taken him seriously, Rajapaksa said.

Asked whether the Australian High Commission had been given immediate access to Mudalige after he reached the CCD headquarters, the Defence Secretary said that the police had recorded his statement in the presence of Australian High Commissioner Robyn Mudie. A senior police official, who had been present at the scene, told The Island that Mudalige could have made whatever allegation in the diplomat’s presence.

The Defence Secretary emphasised that Australian authorities should conduct a thorough inquiry into the circumstances, in which Gunaratnam had received a new identity courtesy the Australian government. Now that Australia had acknowledged the issuance of a passport to Gunaratnam, a person of dubious background it would be interesting to see whether action would be taken against the Australian of Sri Lankan origin. The GoSL was ready to assist in the inquiry, he said, adding that the bottom line was that Premkumar Gunratnam no longer existed. Gunaratnam’s mother and wife had both denied having met him for years. In fact, Gunaratnam wife was on record as having said that she last met him in November 2006, the Defence Secretary said.

The Defence Secretary said that Gunaratnam securing a new identity was definitely not an isolated case. There could be thousands of Sri Lankans having new identities courtesy Western governments.

Many an eye brow has been raised over Australian High Commissioner Robyn Mudie having in her possession the Australian passport issued to Noel Mudalige, the leader of the Frontline Socialist Party (FSP), who walked into the Crime Detective Bureau (CDB) headquarters, at Dematagoda yesterday.

Immigration and Emigration sources told The Island that when Mudalige declared that he didn’t have his passport with him the police had requested HC Mudie to issue him with an emergency travel document.

But, when HC Mudie returned yesterday morning to accompany the Australian to the BIA, she produced the original passport of Mudalige. 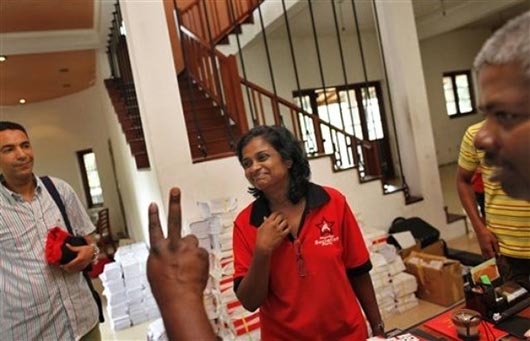 Courtesy: The Island / Pix by AP