Achieved a great victory at the UNHRC, as Govt’s approach won praise – President

President Maithripala Sirisena yesterday (2) said that the country had achieved a great victory at the United Nations Human Rights Council (UNHRC) as the international community expressed high appreciation of the steps taken by the government since January. He pointed out that Sri Lanka succeeded in excluding the ‘electric chair’, an international investigation, and a hybrid special court from in the United States sponsored resolution.

Addressing the media at the President’s House immediately after his return from Geneva, President Sirisena this government was able to change the situation within the last nine months to inquire into alleged human rights violations and war crimes before a domestic tribunal under provisions of the country’s constitution by winning over the international community.

He said he would call an all party conference, a council consisting leaders of all religions in the country to discuss this matter and enact the mechanism to bring about lasting reconciliation in a society where democracy is vibrantly upheld.

The President said he would call a forum for intellectuals and scholars in the country and abroad to express their views for this purpose.

The President said while the inquiry is continued, the traditional, social and cultural matters would be taken into consideration and if these are matters which cause any harm, those would be taken before the UN for alterations. He said there is only a resolution against Sri Lanka which consists of proposals and not a set of orders.

He said the Sri Lankan government’s achievements were successful despite 37 groups operating at international level upheld the Eelam concept and stood against the latest resolution. He pointed out that a group led by Vaiko in India staged a protest against this latest resolution against Sri Lanka.

President Sirisena pledged that the dignity of the forces and the country would be protected by himself and Prime Minister Ranil Wickremesinghe. He also appreciated the support of the Prime Minister, Foreign Minister Mangala Samaraweera, ministers and others.

He said such resolutions have been moved not only against Sri Lanka but against some other countries as well. President Sirisena said most countries dragged those inquiries for a long period but Sri Lanka would not burden the people. He said this issue will be solved within a short period without causing any damage to any party. He added that there would only be a domestic mechanism, which would be implemented within the provisions of the Sri Lankan Constitution, without impinging on the sovereignty of the nation, unity and peace.

He added that the previous administration had deliberately squandered goodwill of the international community and the world body.

Apart from giving compensation to those affected by the war along with giving houses and lands to those who had lost them during the war, the President explained that the civil administration in the North and East would be strengthened.He said that a special local legal board would be established, adding that both members of the armed forces and the Liberation Tigers of Tamil Eelam cadres with allegations of human rights violations against them would be given an opportunity to present their cases.

The President added that he would soon be convening discussions with political party leaders along with a summit with religious leaders, intellectuals and expatriates with regards to sharing ideas and recommendations concerning the resolution. He emphasized that although alleged war crimes had taken place during the previous regime, it was now the sole responsibility of the incumbent government to ensure that the burden would not be handed down to those taking over the reins in the future.

Property and lives were also destroyed in Colombo and the South during the war. We will implement what is acceptable in the Darusman report and the Lessons Learnt and Reconciliation Commission, Udalagama Commission and the Paranagama and Desmond De Silva Commission reports, he said.

The President said the government would follow a moderate policy with regards to the implementation of the mechanism and if there are issues that arise as per the opinion of the public and the country’s culture we will take up the matters again with the UNHRC and the Secretary General of the United Nations.

“I will not be taking arbitrary decisions but will work in consultation. I take pity on those who accused us of being stooges of the West and of conspiring with overseas intelligence agencies. Thirty-seven powerful pro Eelam organizations opposed the resolution. We must be mindful of these situations and conditions too. We have proven in the past eight months that we intend to establish democracy, good governance and promote peace and reconciliation and that we will continue to do so. We will not allow the country to be divided,” President Sirisena assured. 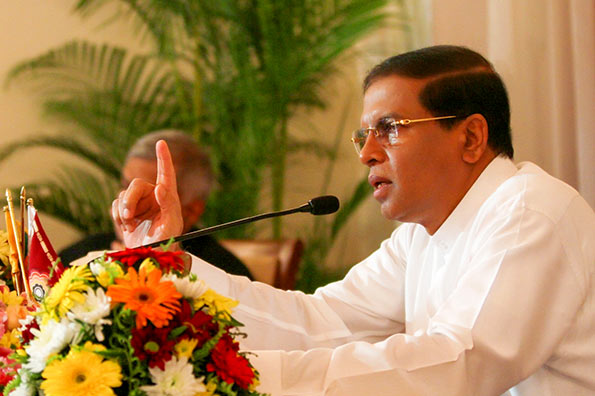 8 Responses to Achieved a great victory at the UNHRC, as Govt’s approach won praise – President