Act on advice of Mahasangha – President 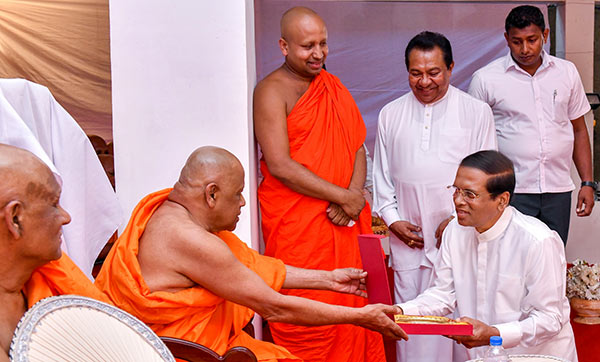 President Maithripala Sirisena on Tuesday said the country will never head in the wrong direction if the state’s leaders act on the advice and guidance of the Mahasangha.

President Sirisena said government policy should always be based on Buddhist philosophy, and when considering the adverse situations that prevailed in many countries across the globe, an environment has been built in our country where every ethnic community can live freely due to the teachings of Buddhist philosophy.

He was speaking at the religious ceremony to place the relics in the newly built Chaitya at the Madanwala Rajamaha Viharaya in Hanguranketha, on Tuesday.

The religious ceremony was presided over by the Mahanayake Thera of the Asgiriya Chapter of the Siam Sect, Most Ven. Warakagoda Sri Gnanarathana Thera and attended by Ven. Dimbulkumbure Wimaladharma Thera, Anunayake of the Malwatte Chapter and Ven. Anamaduwe Dhammadassi Anunayake Thera of the Asgiriya Chapter. People’s representatives in the area including Parliamentarian S.B. Dissanayake and devotees also participated. A special memento was presented to the President by the Chief Incumbent of the Temple Ven. Wellagiriye Sumangala Nayaka Thera on behalf of the Dayaka Sabhawa to mark the visit of the President to the temple.