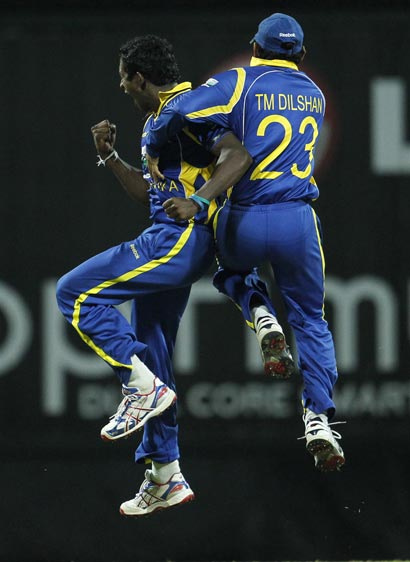 Ajantha Mendis turned tricks beyond the grasp of six Australian batsmen as Sri Lanka completed an eight-run victory for a 2-0 sweep of the Twenty20 series at Pallekele.

Playing his first, but surely not last, match against the Australians on this tour, Mendis plucked 6 for 16, the best figures in international T20 history, including three of the four wickets to fall for four runs in a frenzied 16-ball phase in the middle overs. All this after Shane Watson’s belligerent 57 from 24 balls seemed to have set the visitors up for a series-levelling victory.

The pivotal moment of the evening came thanks to Angelo Mathews’ remarkable feat of athleticism, when he collected a David Warner heave on the edge of the midwicket boundary, and then threw the ball back into play for Mahela Jayawardene to complete the catch.

Watson was close to lbw in the first over of the chase, the umpire ruling that Nuwan Kulasekara’s extravagant inswing would have taken the ball past leg stump. After three overs of pace, Australia were rolling nicely at 30-0, but their momentum would increase violently against the spinners.

Dilruwan Perera’s first ball was reverse-punched past cover by Warner, before Watson began to target the arc between long-on and midwicket in much the same manner as he had done to record-breaking effect against Bangladesh in Dhaka in April. Five times he cleared the ropes, and by the time Mendis’ introduction brought a skier and a wicket, Australia needed a decidedly manageable 87 from 85 balls. Watson had not, however, done enough to put the result beyond question.

The Sri Lankans sensed something when Warner followed, brilliantly pouched on the boundary by Mathews who then threw the ball – in the split-second he had before going over the rope – towards an alert Jayawardene. Shaun Marsh again looked all out of sorts against spin and was stumped for a duck wandering down the wicket to Mendis, who went on to complete a dual-wicket maiden.

Next, David Hussey played around Rangana Herath to be bowled, leaving the visitors in dreadful trouble despite a manageable required-rate. Cameron White and Steven Smith tried to keep their heads from spinning, but were initially unable to do more than poke the slow bowlers around in the face of occasionally extravagant turn.

A pair of sixes to White seemed to push the innings back into a state of health, but as if on cue Mendis returned to bowl a dancing Smith and a groping Brad Haddin off consecutive balls. Mitchell Johnson eluded the hat-trick, but eventually became Mendis’ sixth victim. White reached the final over needing 15 for victory, only to be bowled off an edge by Thisara Perera, and the task proved beyond Australia’s last pair.

Earlier, Sri Lanka were unable to conjure the partnerships they managed in game one, but Jayawardene’s 86 provided a centrepiece to stand with Tillakaratne Dilshan’s effort on Saturday. Hampering the hosts’ batting was an outstanding spell by John Hastings, who returned 3 for 14 from his four overs. Brett Lee also nabbed a trio of victims.

After enduring a couple of nervy moments, Jayawardene surged through the gears, driving through the covers and then playing an easy pitching wedge down the ground for boundaries. Two more Jayawardene strokes sent the new ball whistling through square leg and point before Lee won an lbw verdict against Dilshan with a delivery that might have flicked leg stump, but that did not stall Jayawardene’s flurry of shots.

White used Steve O’Keefe for a solitary over before replacing him with Johnson, just as he had done in the first game, and the formulaic approach suited the Sri Lankans. Jayawardene punctured a packed offside field three balls in a row before White posted a deep cover.

O’Keefe was recalled to the attack as the fielding restrictions ended, and after his over quelled some of the scoring, Smith’s introduction reaped Dinesh Chandimal’s wicket. Thisara Perera, promoted ahead of Kumar Sangakkara, collected one boundary from an O’Keefe misfield, before slicing Johnson to third man, and on 53 Jayawardene appeared rather more lbw than Dilshan had been. However Smith’s appeal was denied, and the next ball was swept for six. At times Jayawardene’s placement seemed so precise, he appeared to be mocking Australia’s fielders, and Sangakkara soon joined the attack.

Their stand of 46 was broken by Hastings, who followed up a tidy first over by coaxing a miscalculation from Sangakkara. Jeevan Mendis did not last the over before cuffing on, and at 123 for 5 Australia had wrested the upper hand. In his next over, Hastings splayed the stumps of Angelo Mathews, sapping the innings of further momentum.

Dilruwan Perera miscued O’Keefe down the ground, where Smith held an admirable catch diving forward, though Jayawardene remained for the final over. He was caught off a ball declared a no-ball for height, and picked up a boundary through the leg side before perishing off the third delivery.

Lee’s finish was, however, spoiled by the concession of five wides from what should have been the final ball of the innings, and his error was made more significant by the closing margin of a rollicking match.