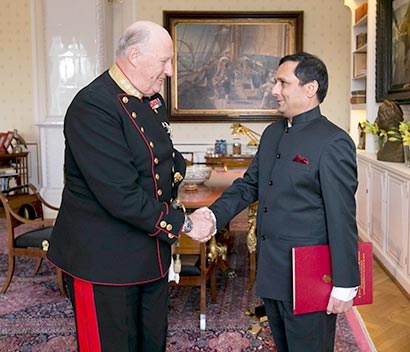 Ambassador-designate of Sri Lanka to the Kingdom of Norway, Musthafa Mohamed Jaffeer, presented his credentials to the King of Norway, His Majesty Harald V on 01st November 2012 in Oslo at a solemn ceremony.

At the discussion that ensued at the conclusion of the credentials ceremony, Ambassador Jaffeer briefed His Majesty the King on the rapid progress that Sri Lanka has made on numerous fronts since the end of the conflict in 2009.  He highlighted the great potential that both Norway and Sri Lanka possess in furthering relations, especially in trade, fisheries, agricultural, tourism and educational sectors. His Majesty the King wished Ambassador Jaffeer success in his efforts to promote bilateral relations between the two countries and a fruitful tenure in Norway.