Now that Ananthi Sasitharan is in Geneva she needs to be given the podium to explain how her husband on behalf of the LTTE recruited young children denied them every human right a child is entitled to and trained them not only to kill but to commit suicide by biting a cyanide capsule that Adele Balasingham a nurse living exile in UK first taught them. If the UNHRC now in session does not raise these questions from Ananthi whose husband recruited the most number of Tamil children then there is some serious flaw in the ‘HUMAN RIGHTS’ that the Human Rights Council espouses to protect and uphold.

The Human Rights Council and members like the US, UK, EU, Canada and Australia are very vocal on accountability. Rightly so, but where is the accountability? It cant be selective. Simply because Ananthi is now a TNA MP she cannot escape answering some hard questions. She has no immunity and she must explain to the world what her husband did before she sheds crocodile tears for missing people.

When LTTE has a 30 year record for kidnapping people and children and forcing them to learn guerilla warfare how many of the missing people would have been taken by the LTTE over 30 years. Let’s not forget that these areas were totally under LTTE defacto control – LTTE had their own police, own courts, own policemen, own schools – the Tamils in these areas were controlled by the LTTE and the LTTE had only one law – ‘you are either with us or you die’. Ask Ananthi to deny this.

Ananthi is bound to do some explaining. Rather than use a smokescreen, there are thousands of Tamil mothers from whom Ananthi’s husband stole their children, thousands of mothers who cannot sleep at night thinking about what happened to their daughters and sons, thousands of mothers who have every right to demand answers from Ananthi and Ananthi is responsible and accountable to answer. She must tell these mothers what happened to their daughters. What mother would want to even imagine that the child their bore into this world would have been used by LTTE as comfort girls/boys or even as killers? Would any mother carry a child for 9 months wanting to turn them into terrorists? LTTE turned them into terrorists, Ananthi’s husband trained them into terrorists and now she must answer. 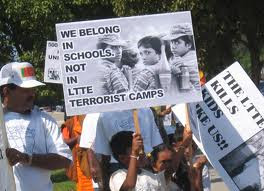 Ananthi’s husband Ellilan was an LTTE political wing leader. He headed LTTE Vavuniya political unit in 2003/2004 (during the 200 ceasefire). He was leader of LTTE Trincomalee district in 2004-2006 and thereafter came to Vavuniya. He was appointed head of LTTE policy progressing in 2007 and head of LTTE police. The policy progressing unit was tasked to pervert the thinking of youth turning them to idolize LTTE terrorism. Brainwashing youth was done through books, magazines, music, street dramas. These factors are details that people attending Geneva sessions must boldly ask of Ananthi and ask her to divulge details of the Anbu Base in Kilinochchi for recruited cadres. This is where Ellilan was head and trained children and it was a base that everyone knew. Ananthi was working in the Government Agent office at Kilinochchi and this very office transported explosives for the LTTE in the Government vehicles as these areas were under total LTTE control.

The Human Rights Council desiring accountability must seek these answers from Ananthi now that she is in Geneva. The Human Rights Council will recall the innumerable reports it has compiled over decades on child soldier recruitment. These reports need to be verified and what better person to do so than Ananthi who has first hand information on how the LTTE trained children, what human rights were denied to these children, in what cruel and sub-human conditions these children lived without love of parents, a harmonious environment, playing with children instead of being given a firearm and taught to shoot and kill. The trauma that children suffered under LTTE needs to be openly admitted and Ananthi is the best direct source from whom the international community can expose the LTTE for its war crimes against children for forcibly conscripting them.

Did Navi Pillay not know this when she met with Ananthi while in Colombo? Did her officials not brief her about Ananthi’s husband? If so, there is a major shortcoming on the part of Navi Pillay.

Moreover, the media functioning as a 5th column in Sri Lanka joining similar role of the Western-backed media conveniently omits the view of other Tamils and we may not know it but there is a large number of Tamils who have suffered because of the LTTE, because of the TNA, because of people linked to the LTTE. What numbers are we talking about? We really cannot tell because the media gives publicity to only the pro-LTTE elements thus making the Tamils victim of LTTE and pro-LTTE sources fear to come out into the open and start accusing the LTTE.

That these Tamils are not people with money is another factor that we need to take cognizance of. This comment from a Tamil over the internet goes to show that the world and even Sri Lankans know half the story:

Quote: “There is no Organisation among Tamils or among other communities take legal action aginst living
LTTE Terrorist like this women. In vanni only poor Tamils dead during the war. The LTTE soldiers also
from poor families. ALL TNA members have their families abroad. What is going on in Tamilnadu and India
abot Rajeev Murderes? We have to cooperate with all people in Sri Lanka and in India who really
aginst Terrorism and aiming to destroy the roots of Terrorism.

Tamils never allow a Butcher to be Priest in Hindu Temple
But in Sri Lanka accused Terrorist are allowed to particpate in Politics and in Govt. Unquote”

What emerges from this is that we need to now expose people like Ananthi and get them to answer some hard questions. Now that she is a regular visitor to Geneva Human Rights Sessions she must be questioned on LTTE actions in particular the role of her husband in child recruitment because he is responsible for the most number of Tamil children forcibly taken and turned into child terrorists. If the Human Rights Council does not question Ananthi on this important aspect or even Radhika Coomaraswamy who handled child soldier subject there is a major travesty of justice for the children who perished, who remain traumatized, who continue to live with the scars that no UN method can remove from their emotions.

The Tamils, the poor Tamils, the low caste Tamil were the real suffers and their voice has never been heard. They are scared to come out, they are supportive of peace, they are appreciative of the Sri Lankan military, they have been kept out of polity by their own people because of their poverty and their caste. The system must change. These people deserve to live their life in freedom and not fear people like the TNA parliamentarians pushing their weight around and Ananthi. We are watching to see when the UNHRC will question her on the specific question of child recruitment for this is an important and integral part that Navi Pillay cannot escape from.