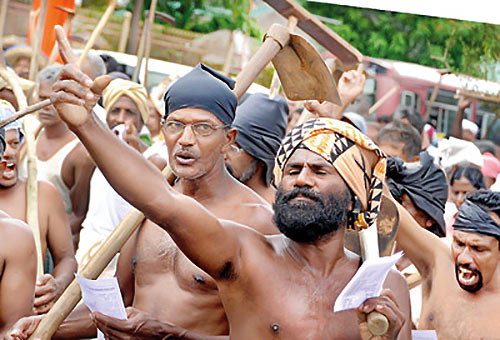 Agricultural activities ground to a halt in many parts of the country yesterday as farmers protested against the government’s move to replace fertiliser subsidy with a voucher scheme.

Paddy farmers in the Kantale, Kaudulla, Medirigiriya and Rajanganaya settlement schemes yesterday withdrew from their duties in farmer associations, while more than 3,000 farmers in the Ambalantota in the Hambantota District and Uhana in the Ampara District also demonstrated without filling forms and opening new bank accounts to qualify for the new fertiliser subsidy scheme.

Farmers held protests at Mahiyanganaya and Polonnaruwa on Monday.

National Organiser of the All Ceylon Farmers’ Federation Namal Karunaratne said they wanted the restoration of the previous fertiliser subsidy scheme and a new certified price for paddy.

He said that according to the previous scheme, all farmers had got Urea, MOP (Muriate of Potash – Rathu Kudu) or TSP (Triple Super Phosphate – Keta Pohora) from the Agrarian Services Centres of the government at Rs. 350 per 50 kg bag.

The same bag of fertiliser was available in the open market at Rs. 1,200 and those who were not entitled to the fertiliser subsidy such as vegetable farmers could buy fertiliser at that price.

Urea, MOP and TSP were used during the initial stages of the cultivation of any crop, he said.

But, according to the new scheme proposed by the UNP-SLFP government, farmers received a Rs. 5,000 voucher each for an acre of paddy to buy the fertiliser in the open market, but the price of a 50 kg bag of fertiliser was Rs. 3,500, Karunaratne said, adding that President Maithripala Sirisena had ordered the price to be brought down to Rs. 2,500 on Monday due to their protests but it was still higher than the previous price.

Karunaratne said a farmer could buy only two bags of fertiliser for an acre under the new scheme.

Two prototrophs were also needed for registration and farmers were also required to deposit Rs. 500 in their accounts.

Matara District UPFA Parliamentarian Chandrasiri Gajadeera said that farmers had to swallow poison again due to low paddy prices. “Paddy farmers in the Kamburupitiya area recently told me at a meeting that their paddy could not be sold even at Rs. 20 per kilo, but the production cost was higher than Rs. 20.”

Gajadeera accused the government of failing to buy at the certified price according to its election promise and was further worsening the plight of farmers with a new fertiliser subsidy scheme.

Minister of Primary Industries Daya Gamage said the government would not cancel the fertiliser subsidy, but introduce a new system which would be more beneficial to farmers.

He claimed that the present government had allocated Rs. 2,500 million more for the fertiliser subsidy compared to the allocation by the previous government.

Gamage accused that the previous government of having provided substandard fertiliser to farmers under the fertiliser subsidy scheme. “We decided to give vouchers to farmers to buy the fertiliser of their choice and at places convenient to them,” he said, adding that using chemical fertiliser without control under the previous scheme had resulted in paddy harvest dropping from 4,000 kilos in 2001 to 3,700 kilos at present per hactare.

The minister said that several diseases had spread due to the widespread use of chemical fertiliser. “Therefore, the government also expects to encourage the production of organic fertiliser under the new scheme.”