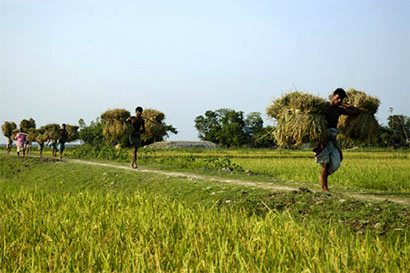 Scientists have identified a variety of aromatic rice in Bangladesh with a very low arsenic content compared with non-aromatic rice. The work has been published in Biomedical Spectroscopy and Imaging. Vast populations in Bangladesh are exposed to arsenic through drinking water and rice, the staple food, grown in soil and water containing high amounts of arsenic. Because the rice plant is highly efficient at absorbing arsenic from soil and water, it is reported to be the highest arsenic-containing cereal. Long-term exposure to arsenic can lead to the development of different types of cancer and serious cardiovascular, neurological and other health problems.

A team of scientists led by Parvez Haris from De Montfort University, Leicester, in the United Kingdom has been carrying out research to remove arsenic from water and to identify ways of reducing human exposure to arsenic through diet. This latest work was carried out in collaboration with Michael Watts of the British Geological Survey. Earlier studies showed high concentrations of arsenic in Bangladeshi rice, but the rice samples were mainly from regions where irrigation water contains high levels of the element.

The team carried out a detailed study on rice from the greater Sylhet region in the north-east, which generally has a lower groundwater arsenic concentration. Ninety-eight rice samples were analysed using a technique called Inductively Coupled Plasma-Mass Spectrometry to determine the total arsenic content and also the arsenic species in a selected group of samples. Aromatic rice is generally cultivated during the wet season and is therefore less dependent on groundwater for irrigation. It also requires less fertilizers and pesticides. The results showed that Sylheti rice had far lower arsenic concentrations than similar types of rice from other regions and that its arsenic concentration was 40 per cent less than that of non-aromatic varieties. It also contained higher concentrations of the essential elements selenium and zinc.

For someone consuming 500 grams a day of non-aromatic or aromatic rice from Sylhet, the daily intake of arsenic from rice would be approximately 48 per cent and 69 per cent lower, respectively, than that of someone consuming non-aromatic rice from other parts of Bangladesh. This finding may also have health benefits for other groups of people who eat large quantities of rice daily, such as those suffering from celiac disease. “It is essential that further research on aromatic rice from different parts of Bangladesh and other regions of the world is conducted,” says Haris.  (Courtesy: The Frontline magazine)

1 Response to Arsenic in Bangladeshi rice like in Sri Lanka

Home » Arsenic in Bangladeshi rice like in Sri Lanka