As a tribute to Muralitharan: President to all Sri Lankans: Rally round team Will fly to Mumbai for finals: 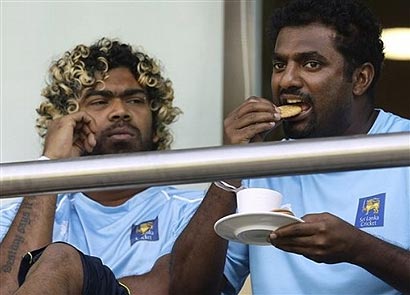 President Mahinda Rajapaksa called on all Sri Lankans to rally around the Sri Lankan team to win the Cricket World Cup – 2011 as a tribute to spin legend Muttiah Muralitharan who will retire from ODIs after the final at the Wankhede Stadium, Mumbai tomorrow.

President Rajapaksa described Muralitharan who will make his final appearance in ODIs for Sri Lanka as a spirited and a true Sri Lankan, a communique issued by the President’s Media said.

He earlier wished and thanked Muralitharan immediately after the semi final between Sri Lanka and New Zealand, where the highest wicket taker ever in both tests and ODI’s made his final appearance for his country on home soil. President Rajapaksa is expected to fly to Mumbai to witness the ICC Cricket World Cup final played between Sri Lanka and India tomorrow.

The Indian Government with the ICC is to make arrangements for the President’s visit.

“The Indian Government is looking forward to the President’s visit and would make all arrangements,” President’s Media Director General Bandula Jayasekera said.

Sri Lanka qualified for the World Cup final for the third time by beating New Zealand by five wickets at the semi final match played at R. Premadasa Stadium in Colombo on March 29.

On Wednesday India beat Pakistan by 29 runs in the semi-final played at Mohali, to qualify for the final.Sri Lanka were ICC World Cup champions in 1996. The summit clash on Saturday would be the first-ever all-Asia final in the history of the World Cup tournament.

Home » As a tribute to Muralitharan: President to all Sri Lankans: Rally round team Will fly to Mumbai for finals: