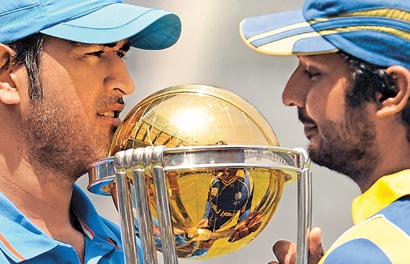 The Sri Lankan cricket team with the wishes of over 20 million Sri Lankans is just a step away from the world championship of the ODIs as they vie for the equally determined Indians at Wankhede Stadium in Mumbai today. Sri Lanka is on the threshold of world’s most celebrated cricket moment.

The Sri Lankan team under the captaincy of Mahela Jayawardena was featured in the World Cup finals in 2007 in the Caribbean Islands. President Mahinda Rajapaksa flew to the Caribbean Islands to be with the Jayawardena and teammates in a move to boost their morale and confidence. People all over the country regardless of their ethnicity or other differences are wishing for the Sri Lankan team’s victory at ICC World Cup finals in Wankhede where the best bowlers and the batsmen in the planet will vie for the coveted trophy.

Both countries want the coveted trophy once each. India emerged victorious at the World Cup finals at the historic Lord’s stadium 28 years ago while Sri Lanka bagged the award in Lahore in 1996. President Rajapaksa on Thursday called on all Sri Lankans to rally round the Sri Lankan team to win the cricket World Cup as tribute to the country’s spin legend Muralitharan who is to retire from the ODIs after today’s World Cup finals in Mumbai.

The President said retiring spin legend Muralitharan is a true Sri Lankan who brought honour to the country.

He said the entire nation is backing the Sri Lankan team for victory.

“We as an undeterred nation has achieved many victories in the world. As much as we saw the ICC World Cup in 1996 we are destined to win it again this year,” he added. Premier Jayaratne added that the leadership of President Mahinda Rajapaksa who liberated the country from 30 years of terrorism is a victorious leadership which has steered us towards new vistas in development and progress.

Kumar Sangakkara at a press conference in Mumbai yesterday said that team is confident going into the finals of the ICC Cricket World Cup and would play as one unit. He said the meeting of the two Asian neighbours for the finals is a victory for the subcontinent.

The nation is fortunate enough to witness the ICC world Cup finals in Mumbai after 30 years of terrorism that engulfed the country.

The country was liberated from the clutches of terrorism by the Government led by President Mahinda Rajapaksa and the people have an opportunity to witness how the great sons of our soils are being played to bring honour to the country.

Thousands of people in the country lost the opportunity to witness how the Lions were fighting with the Aussies in 2007 for the coveted cup in the Caribbean Islands as LTTE terrorists started carrying out air sorties by light weight aircraft. The entire area faced a black out and the people were gripped with fear as anti aircraft gunfire lit up the sky on the night of the 2007 cricket World Cup final.

Sri Lankans are blessed with a situation where people are living without fear. All Sri Lankans could be assured of viewing a full match on their Televisions without harbouring thoughts of fear and anxiety about any lurking terrorist threat.