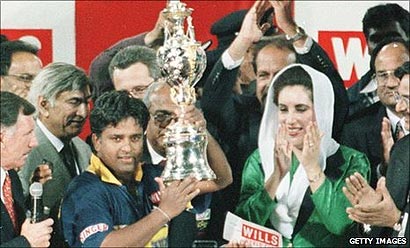 Cricket lovers, ranging from senior bureaucrats to local ‘tuk-tuk’ drivers, are not amused over former Sri Lankan cricket captain Arjuna Ranatunga’s off-the-cuff remark that he does not advise the cricket team any longer because President Mahinda Rajapaksa has taken up that job.

Sri Lanka takes on India in the final of the 10th edition of the ICC World Cup in Mumbai on Saturday. People to whom The Hindu spoke to in Colombo disapproved of the remarks.

“This is totally against the spirit of the game. I can only think that this person does not want the Cup to come back to Sri Lanka,” he added. Senior bureaucrats in the Government said that they were unable to recall any instance of the President advising the country’s cricket team on strategy or other aspects of the game. A few sports journalists too concurred with this view.

They said the President watches the game at the stadium when he finds time and cheers the team, but does not talk to the team on specifics.

“He wants the team to play good cricket and win. In fact the last time he spoke to the team, he wanted them to win the Cup for Murali because this is his last World Cup,” said a journalist.

Cricket is the most popular sport in Sri Lanka like in India, and everyone — from the local tour guide to pilots — have offered advice in the media as to how the country should approach the final against India.

Comments on a TV show

Ranatunga made his comments on a TV show in New Delhi on Thursday. A viewer from the audience had posed the question: “What is your prediction for the coming finals here? Did you send any message to your team to repeat the 1996 victory? Or you sent message to 1983 winner? Which one? ”

(The viewer was referring to the 1996 Sri Lankan win and the 1983 Indian victory. Both countries have won the World Cup only once in the past ten editions. For Sri Lanka, this is its second consecutive final in the World Cup.)

“I know for sure it happened to me and I am sure it will happen to Mahendra Singh Dhoni and the rest (of the team) and it will happen to Kumar Sangakkara and the rest. But they were tagged as the favourites to win the World Cup and it is good to see two Asian countries in the finals. I hope they play a very, very good game. I hope they will play 100 good overs. That should be the key point. Whoever wins, I know India’s batting is very strong but Sri Lanka has a very good side.

“Only unfortunate thing I am a little worried about is my (Sri Lankan) middle-order. But the batting has been dependent on (Tillakaratne) Dilshan who has been outstanding in this tournament, not only as a batsman, bowler, fielder, and Sangakkara has been very consistent.

“(Upul) Tharanga has been pretty good. My only worry is that Mahela Jayawardene, apart from the Group A match against the Canada team, has not fired and the middle-order from No. 5 to No. 7 hasn’t performed. So you have to wait and see. Depending on who absorbs pressure in this game, and who will come out and play well. So we have to wait and see.

3 Responses to Ranatunga’s comments not in game’s spirit: fans