The government is to hold massive islandwide protest campaigns today against the resolution which is to be presented against the Sri Lankan government at the United Nations Human Rights Council (UNHRC) sessions in Geneva to be held from today to March 24.

The protest campaigns will be held at regional level. They will take place in 150 main cities across the country. The main campaign is to be held in Colombo at 3pm. The government urged the public to line up as one nation to defeat local and international challenges directed towards the country, ahead of the UNHRC.

“The country’s leadership and Tri – Forces personnel faced a number of barriers and obstacles in the journey towards a peaceful and fruitful country. Thousands of Tri-Forces personnel have sacrificed their lives for making the country a peaceful place to live in,” Allahapperuma told a press briefing yesterday. Certain Western elements tried to impose unnecessary pressure in the conduct of the country’s internal affairs during the last few days of the war, he said.

“President Mahinda Rajapaksa faced them in a firm manner and those elements failed to impose their will on Sri Lanka. The President has created a peaceful country as he promised to the public in 2005,” he added. “A number of local and foreign forces have stood against this great effort from time to time. We suspect that the allegation about human rights violations is also one of them. Sri Lanka had not violated human rights. The Sri Lankan government and the military rewrote military theories by performing a humanitarian mission,” Alahapperuma said.

“President Rajapaksa had challenged the conflict management theory introduced by some Western countries. As a result, they have named Sri Lanka a country engaged in human rights violations.

‘This protest is not against the UNHRC. But we urge them not to use the Human Rights Charter as a weapon, like during colonial rule,” the minister said. “The proposal to be discussed in Geneva is one of the strategies created by the certain Western elements to get involved in the internal affairs of Sri Lanka.

‘At a moment when they should support Sri Lanka’s revival, they are trying to impose their will on us,” Alahapperuma said. The government appeals to the international community to support Sri Lanka to establish itself as a free and independent state after defeating terrorism.

The public are also requested to unite to safeguard the country putting aside the economic, political and all other social problems, he said. 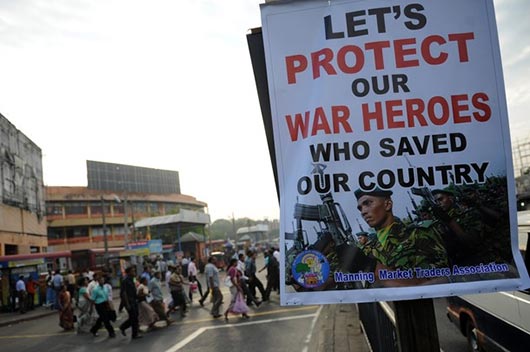