GoSL welcomes US stand on ‘accountability’ 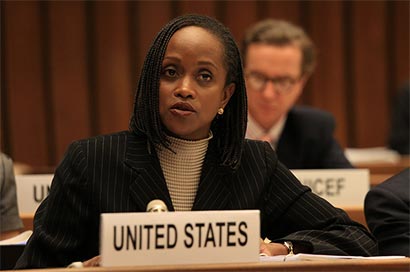 The Sri Lankan government says that those talking of moral obligation on the part of the US and its allies to intervene in Sri Lank have conveniently turned a blind eye to the position taken by the US at the first Universal Periodic Review (UPR) of the world’s solitary superpower  before the UN Human Rights Council (UNHRC) on Nov. 5, 2010.

GoSL sources told The Island that the decision to move a resolution against Sri Lanka was contrary to US position articulated by Assistant Secretary of State for International Organization Affairs, Dr. Esther Brimmer that the responsibility on the part of the administration was for own people, to whom we are ultimately accountable.”

The human rights review took place in the wake of whistleblower website, Wiki Leaks releasing a plethora of classified military and diplomatic documents relating to excesses by US forces fighting non-state actors and the US military ignoring abuses by those working under its command both in Afghanistan and Iraq. Since then, international human rights organizations, including the US based Human Rights Watch (HRW) have accused the US of massive excesses.Responding to Dr. Brimmer, Cuban Ambassador Rodolfo Reyes Rodriguez demanded an immediate end to US blockade targeting Cuba, which he called a crime of genocide. Ambassador Reyes alleged that the US action seriously violated the rights of the Cuban people.

The Cuban reminded how the US was continuing torture, extradition, executions and other serious violations in Guantanamo, Abu Graib, Baghram, and other facilities. Iran, Venezuela, North Korea, Russia, China, Algeria, Bolivia and Nicaragua backed Cuba.

Many concerns were raised about America’s record on counterterrorism and alleged use of torture. Cuba and its allies demanded the military base at Guantanamo Bay be closed.

Although Legal Adviser of the Department of State, Harold Koh, categorically declared that the US did not and would not torture, while reiterating President Barack Obama’s commitment to closing Guantanamo, since the Nov. 2010 meeting many more US excess had come to light, sources said.

Referring to the fresh wave of violence in Afghanistan leading to the killing of four US personnel, including two senior advisors, government sources said that trouble had erupted after it emerged that copies of Koran were destroyed at a US military facility.

In line with the UPR process 192 UN member states are subjected to scrutiny once in every four years. GoSL delegation sources told The Island that nothing could be as accurate as what US Assistant Secretary of State Esther Brimmer told theUNHRC sessions two years back. Brimmer made that statement in the presence of Eileen Chamberlain Donahoe, US Ambassador to the Human Rights Council who is leading the campaign against Sri Lanka here.

In the run-up to 19th sessions of the UNHRC, Ambassador Donahoe reiterated the moral responsibility on the part of the US and like-minded countries to pursue accountability issues in Sri Lanka. She was speaking at a meeting attended by senior representatives of all member states of the UNHRC numbering 47.

Sources said that the US position articulated by Assistant Secretary of State, Brimmer also contravened the R2P or ‘Responsibility to Protect’ doctrine pursued by Western powers and those NGOs funded by them. GoSL delegation now in Geneva told The Island that stand taken by the US at the 19th UNHRC sessions scheduled to begin today (Feb. 27) totally differed from its position at the first UPR review.

The US joined the UNHRC in early 2009, three years after the establishment of the body.

The GoSL delegation said President Mahinda Rajapaksa had emphasized on many occasions that his responsibility was for the people of Sri Lanka. Sources said that the government dubbed its military campaign a humanitarian operation as one of its major objectives was the rescue of the Tamil speaking people.

The position taken by the US Assistant Secretary should be applied to any other country fighting state or non-state actors, in Sri Lanka’s case a formidable internal threat backed by powerful external factors.

6 Responses to GoSL welcomes US stand on ‘accountability’