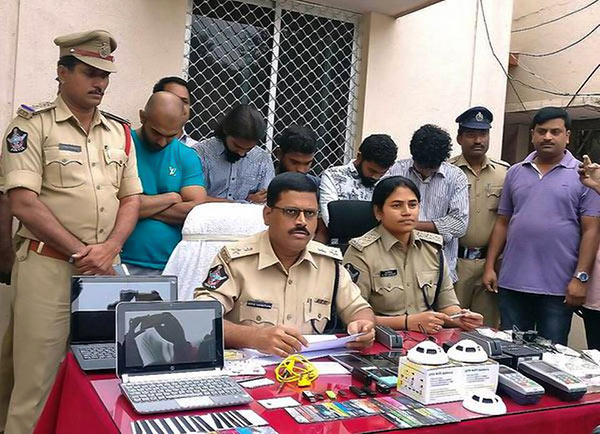 The Chittoor police on Saturday nabbed a five-member gang hailing from Tamil Nadu involved in ATM-cloning offences while they were about to strike at an ATM centre at Palamaner and seized Rs. 10 lakh, electronic gadgets used for cloning ATM cards, capturing details of PIN numbers and swiping machines.

The officials said it was the first cyber crime to be registered and busted in the State.

On August 24, a farmer of Palamaner was stunned to observe that ₹1.58 lakh had been withdrawn from his account through ATM, despite the fact that the card was very much in his pocket. Within a few weeks, 22 customers of various banks became victims in the district.

Ms. Chowdeswari, considered an expert in dealing with cyber crimes, was entrusted with the assignment to track down the offenders.

At Palamaner, Panjani and Renigunta in Chittoor district, the special teams detected the clandestine use of mobile numbers meant for setting up of wi-fi connected CC cameras to obtain the PIN numbers at the ATMs.

The gang had obtained the cloning technology from one Alfred Bala Kumar of Sri Lanka and Umesh of Mumbai, paying them hefty commissions for each successful crime.

The officials said the modus operandi of the gang was to select isolated ATM centres and fix skimmers (mouths) at the swiping ends which would collect the ATM card details. They arranged the wi-fi enabled CC cameras to capture the PIN numbers. In a couple of hours, the cloned cards would be ready. To evade being captured and in view of the ceiling on withdrawal, the gang would finish their work before and after midnight.

The special party on Friday night detected the mobile signals of the suspected gang in and around Palamaner. After alerting the checkposts and using the relevant technology, Ms. Chowdeswari and her team zeroed in on the gang at an ATM centre early Saturday, while they were busy attempting withdrawals with cloned cards. The gang members were identified as Niranjan (37); S. Mohiddin (25), MSK. Rakshit (28), A. Suresh (26) of Chennai city and B. Tamilasaran (25) of Krishnagiri in Tamil Nadu. Two other accused from Sri Lanka and Mumbai are at large, and a special team has been formed to track them. It is suspected that half- a-dozen gangs might be on the prowl in various parts of the State.

During interrogation, it was found that the gang had recently tried in vain to collect details of cards at an ATM centre in Mangalagiri of Guntur district.