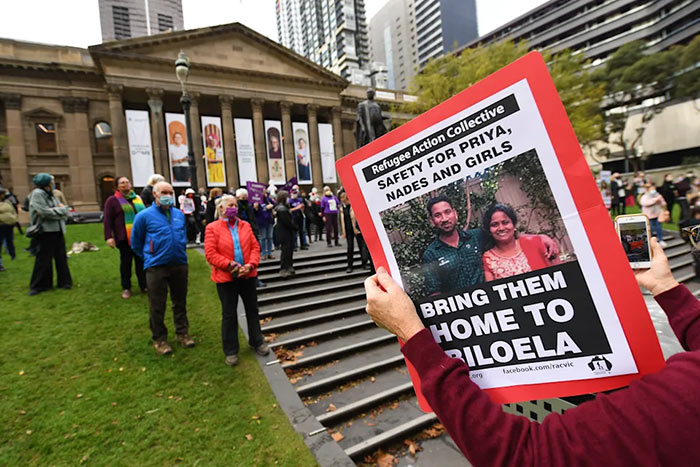 Australia will allow a Sri Lankan asylum seeker family detained on Christmas Island since 2019 to live in community detention on the mainland after public anger over their separation when the youngest child became sick and was flown to a major hospital.

The Tamil family of four, the only occupants of the Christmas Island detention centre in the Indian Ocean, have become a cause celebre for those seeking closure of Australia’s offshore immigration detention centres.

However, the family’s long-term future remains unclear with the government saying the move is temporary and vowing not to allow asylum seekers who arrive by boat to live in Australia.

“In making this determination, I am balancing the government’s ongoing commitment to strong border protection policies with appropriate compassion in circumstances involving children in detention,” Minister for Immigration Alex Hawke said on Tuesday.

When the couple’s four-year-old daughter was recently flown to Perth in Western Australia state for urgent medical care after developing sepsis due to untreated pneumonia, and only her mother was allowed to travel with her, public anger grew and the separation caused splinters within government ranks.

Australia’s conservative government for more than a week resisted calls to free the family, known as the ‘Biloela’ family after the Australian town they lived in before detention, insisting it would undermine its hardline immigration policies. But Hawke on Tuesday bowed to public pressure.

Hawke said the decision did not mean the family would be permitted a visa to remain in Australia.

Priya and Nadesalingam Murugappan arrived in Australia by boat in 2012 and 2013 and sought asylum. The couple married in Australia, where their daughters were born.

In 2018, after Australia rejected the asylum applications of Priya and Nadesalingam, who fled Sri Lanka amid a civil war, Canberra detained the family for deportation to Sri Lanka.

When court orders blocked their deportation, Australia in 2019 moved the family to Christmas Island, a territory some 1,550 km (960 miles) northwest of the mainland.

Australia’s conservative government must return to the polls within a year and its hardline immigration policy remains popular despite widespread criticism.

Under Canberra’s hardline immigration policy, anyone who arrives by boat without a valid visa is not allowed to settle in Australia.