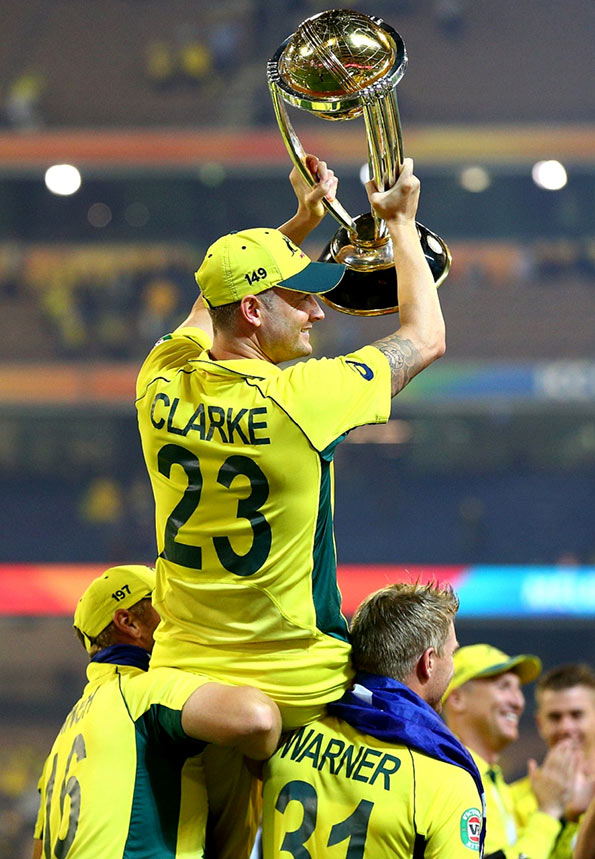 Michael Clarke signed off from one-day internationals with 74 as a dominant Australia won their fifth cricket World Cup after crushing New Zealand by seven wickets at the Melbourne Cricket Ground on Sunday.

New Zealand, playing in their first final after succumbing six times in the semis, suffered a body blow in the opening over from Mitchell Starc when captain Brendon McCullum was bowled without scoring from the third ball he faced.

A fourth wicket partnership of 111 between Ross Taylor (40) and Grant Elliott (83) appeared to restore New Zealand’s fortunes although runs came slowly against a hostile, accurate pace attack with Starc in outstanding form.

New Zealand had reached 150 for three with 15 overs remaining when Faulkner struck twice in the first over of the batting powerplay. He dismissed Taylor caught behind and bowled the potentially dangerous Corey Anderson for a duck two balls later.

The remaining wickets fell swiftly and New Zealand were bowled out for 183 with five overs remaining. It was the lowest first innings score in a 50 overs World Cup final since Australia disposed of Pakistan for 132 at Lord’s in 1999.

David Warner responded by striking Tim Southee for three consecutive fours and raced to 45 from 46 deliveries when he hooked Matt Henry to Elliott.

Clarke entered the arena to a standing ovation and attacking fields from McCullum who placed six players inside the circle on the off side.

Both Clarke and his heir apparent Steve Smith played the bowling on its merits as McCullum, whose aggression with the bat and as captain have transformed the national side, switched his bowlers and field placings in an effort to conjure a wicket.

Clarke struck Daniel Vettori over the bowler’s head for six and McCullum brought his best bowler Boult back for a final fling. Clarke responded with a perfect off drive to the boundary.

He reached his 50 from 56 balls and acknowledged another standing ovation from the crowd for his 58th and final one-day fifty. After a final flurry of boundaries he was bowled by Henry giving Smith (56 not out) time to complete his half century as Australia won in 33.1 overs.

After winning the toss on a perfect late summer’s day before a crowd of 93,013, McCullum was beaten by the first two balls he faced and bowled off stump by the third, a late inswinging yorker from Starc.

Martin Guptill cover drove the first boundary of the day off Josh Hazlewood and top-edged a six before Clarke turned to Johnson’s pace and Glenn Maxwell’s off-spin.

The move was immediately successful when Guptill was bowled by Maxwell’s second ball making room to punch a ball off the back foot which turned less than he anticipated.

Kane Williamson was caught and bowled by Johnson for 12 at which stage Taylor and Elliott consolidated on a partnership which gradually dragged New Zealand back into contention.

Elliott, the man-of-the-match in the semi-final win over South Africa, played two assured cover drives to the boundary and a less convincing top-edged hook for six on his way to a half century off 51 balls.

Taylor played a more restrained role, content to push the ball around for singles, before he was caught by wicketkeeper Brad Haddin for 40 off the first ball of the batting powerplay.

Elliott, who had survived two television reviews of lbw decisions, one by the batsmen and the second by the fielding side, was caught by Haddin of Faulkner after striking hitting seven boundaries and a six from 82 deliveries. 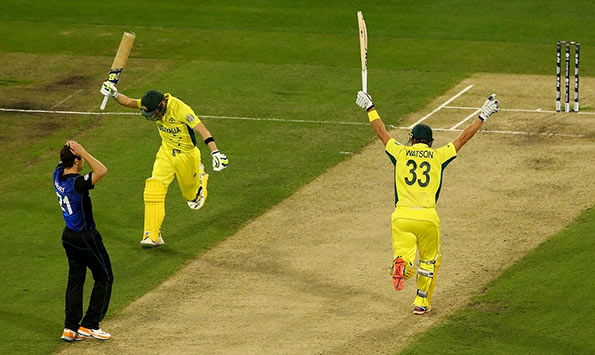 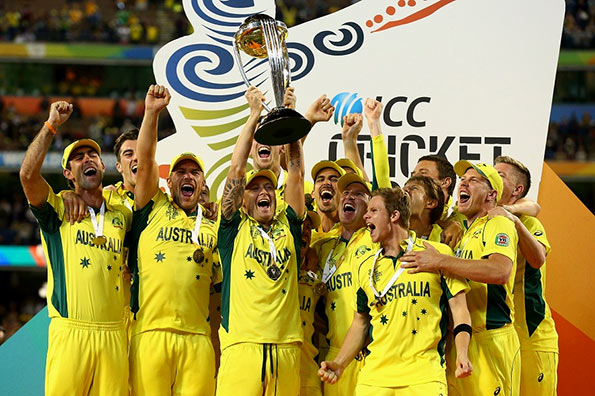