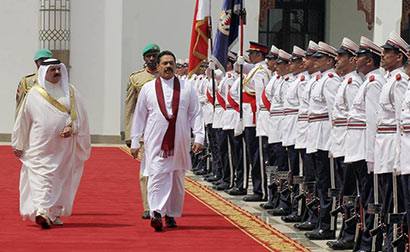 Prior to the luncheon, the two leaders met briefly along with the respective delegations. Discussions focused on improving already friendly relations. The high-level visits between both countries have recently enhanced ties between the two nations.

Almost exactly five years ago, the Prime Minister visited Sri Lanka on the invitation of President Rajapaksa. That was the first high-level visit to Sri Lanka from Bahrain in 33 years. President Rajapaksa’s current state visit is the first visit ever from a Sri Lankan president. This visit is expected to further cement cooperation and collaboration between the two nations that share a long history of cordial relations, even before formal bilateral ties were established in 1992.

A number of Bahraini ministers accompanied the Prime Minister at the luncheon.