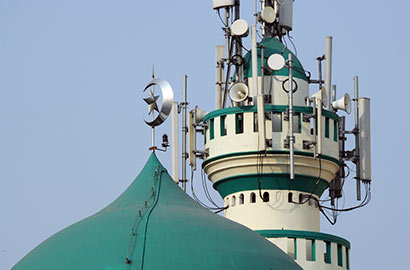 The continuous daily disturbance of the solemn proceedings at the Mahabodhi Temple at Buddhagaya and the harassment of the Buddhist devotees gathered there through the screeching sound of the call to prayer (Azan) by loudspeakers at a newly established Mosque close to the Mahabodhi Temple, the holiest Buddhist shrine in the world, is the most striking example of the abuse of religious freedom. To compound this daily humiliation of Buddhists at the most venerated site of Buddhism, is the deafening silence of the civic authorities meant to keep the peace at Buddhagaya and sense of utter helplessness pervading Governments of predominantly Buddhist countries in the face of increasing incursions into the heartlands of Buddhism by adherents of abrahamic faiths striving for world domination.

Meditation, recitation of Buddhist ‘gathas’ and religious conduct like silent contemplation at Buddhagaya are disturbed by the amplified noise emanating from the mosque. This is highly uncalled for especially when it is morally incorrect and unethical to disturb the place of worship of another religion. Mosques did not exist around Buddha Gaya until very recently which goes to show that surrounding non-Muslim religious sites has been done on a planned and deliberate basis.

India which takes pride in claiming quite correctly that the enlightenment of the Buddha took place on Indian soil i.e. Buddhagaya, and reaped re-sounding benefits globally by claiming the Buddha to be a son of India (Bhumiputra) risks losing its standing in the Buddhist world if it takes no effective steps to re-locate this Mosque and shut its loudspeakers.

Lack of reciprocity on freedom of religion

No Muslim country would allow a place of worship of another religion to be established anywhere close to a Mosque let alone the holy sites of Islam. Buddhism and Hinduism despite being global religions are not recognized as religions by most of the middle eastern countries for the simple reason that they are not ‘religions of the book’. The Quran which is the central religious text of Islam recognizes only the Abrahamic religions i.e. Christianity and Judaism, and consequently the followers of religions not mentioned in the book are denied basic rights of freedom of worship in the vast majority of Muslim countries including Maldives. A sense of reciprocity is lacking when it comes to recognizing the rights to freedom of worship of Buddhists and Hindus.

While Muslim countries grant exclusivity to the establishment of Mosques and practice of Islam on home territories, and adopt an uncompromising stand on such issues, pre-dominantly Buddhist countries and predominantly Hindu India are unable to claim exclusivity even in respect to their religious citadels. They have become the victims of ideologies manufactured in the West to meet the demand of Europeans wanting to escape the rigid hold of the Vatican and other Christian churches but have no real relevance outside Europe. Ideas like ‘Secularism’, ‘Pluralism’, ‘Multi – culturalism’ and the like are now being freely and manipulatively used by the Human Rights industry which has the unstinted backing of Christian Churches and Western Christian countries to restrict or eliminate altogether state patronage being extended to Buddhism.

Ranavirus in danger of being marginalized in history text books

These ideas garbed in the language of human rights are meant to have calamitous effect on both the state and indigenous peoples in Buddhist countries. Human Rights crusaders want the erasure of the past, re-writing of history and white washing of all European crimes against humanity committed in non – European lands. They in a subtle way indoctrinate students in Schools and Universities to be angry about their national identity and discard pre-colonial history. The ancestral culture of the nation as retold in historical chronicles like Mahavamsa is rejected. It does not exist or it does not matter is the attitude promoted. National heroes who fought for ‘rata, jathiya, agama’ like King Dutugemunu, King Wijayabahu, Mayadunne, Sithawaka Rajasinghe and the like are reviled and mariginalised in history text books for school children on the ground that they are divisive icons.

If this trend is allowed to continue and NGOs are permitted to interfere with the content of the school text books on history then it is only a matter of time before our contemporary heroes like the gallant Ranavirus who won the war against terrorism to be excluded from history texts for school children on similar grounds.

In Sri Lanka historical Buddhist places of pilgrimage like Sri Pada, Kataragama (Hindu – Buddhist), Dambulla, Kandy and even Anuradhapura (citadel of Buddhism in Sri Lanka) are now being turned into religious centres of all faithsunder the much abused euphemism ‘ multi –culturalism’. To draw attention to the rapidly eroding Buddhist cultural landscape of the country is to risk being ‘lynched by the media mob’ that serves the agenda of alien interests and performs the role of a fifth column.

In Sri Lanka the issue of loudspeaker usage by mosques has generated public debate and outrage. Despite a Supreme Court interim order restricting use of loudspeakers, loudspeakers from mosques still continue to provoke and disturb non – Muslims particularly Buddhists even on poya days. The regular worship in Kandy the site of the Dalada Maligava (Temple of the Tooth) is disturbed by the loudspeakers of the mosques showing a flagrant example of lack of respect for the predominant religion of Sri Lanka.

“No religion prescribes performing prayers through amplifiers and the use of microphones and loudspeakers by religious denominations are to be within the limits prescribed under the Environmental Laws and Police Acts,” a division bench comprising Chief Justice Manjula Chelloor and Justice K. Vinod Chandran said in their decision on a public interest litigation (PIL) appeal.

The Delhi High Court directed all mosques and temples in Ekta Vihar and Sunder Nagri in east Delhi to restrict the decibel level of loudspeakers. It said the loudspeakers should be positioned at a restricted height of only eight feet from the ground. The court also directed them to change the direction of the loudspeakers and make them face the wall of buildings, and not outside, to reduce the noise level.

In Sri Lanka, the Supreme Court made a ruling on 9 November 2007 pertaining to loudspeakers. It viewed the freedom of one party to use loudspeakers against the annoyance, disturbance and harm caused to other parties who were compelled against their will to listen to the amplified sounds from the loudspeakers.

The Court considered the unqualified use of freedom of worship by Mosques to force public i.e. non – Muslims, to become captive listeners – violating their right to silence and quiet enjoyment of their property. Even if the police had issued a license for the use of loudspeakers under Section 90 of the Police Ordinance of 1865, the Court held that nobody can claim the fundamental right to create noise using loudspeakers. If people have the right of speech others have the right to listen or decline to listen. Nobody has the right to trespass into the ears and minds of others on the grounds of religious freedom. The Court also held that no religious body is entitled by reason of claimed religious practice to commit a public nuisance. The police permit is not a protection against the creation of public nuisance under Section 261 of the Penal Code.
The Supreme Court also held that there was no requirement in the teachings of any religion to use loudspeakers as rituals. Loudspeakers are a new electrical phenomena – they did not exist during the times the religions were founded. The Court also held that harm is done to school children whose studies are being disturbed as well as sick people recovering from illness. Court held that the noise from loudspeakers produced serious physical and psychological stress.

It is well established that noise pollution leads to hearing loss, high blood pressure, mental stress and heart disease, among others.
Last December in areas of Dehiwala and Wellawatte the mosques have continued to use loudspeakers causing the noise to reach far and wide and thereby committing an act of provocation and disturbing the O/L students preparing to face their exams.

In the light of the Supreme Court interim order in 2007, President Mahinda Rajapakse made a huge concession allowing Azan to be broadcast over national radio 5 times a day. This was based on the assumption that Mosques would comply with the Supreme Court decision and stop using loudspeakers directed outward at the public. Since Mosques by and large are not complying with the Supreme Court decision it is worthwhile to review the broadcasting of Azan on national radio. In the alternative use the dedicated Radio Channel meant exclusively for Muslim religious programmes and broadcast Azan over such Radio channel without forcing non – Muslims to listen to Azan over national radio channels.

Why do Muslims need to listen to azan to get ready for prayers? The world is not a desert. It is a modern world. It is 21st century, not 600 something AD. People know the time – everyone has watches, mobile phones, phones, alarm clocks and in Sri Lanka there is a dedicated radio channel for Muslims. Therefore, we question the need for loudspeakers in mosque when there are enough channels to inform Muslims to come to prayer.

Finally, We the Buddhists of this world appeal to Mr. Narendra Modi, the prospective Prime Minister of India and the incoming BJB Government to remedy the serious injustice caused to the Buddhists of both India and overseas, who are prevented from conducting traditional Buddhist rites and rituals in a peaceful and conducive atmosphere at Buddhagaya, because of the severe disturbance emanating from the loudspeakers installed at a newly established Mosque close to the Mahabodhi Temple at Buddhagaya.