Be humble and serve the masses – President 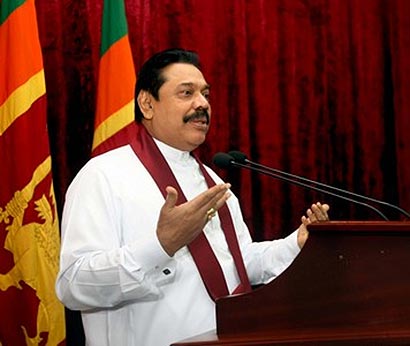 All victorious candidates of the United People’s Freedom Alliance at the recently concluded Provincial polls should dedicate themselves to serving in general to their Province and the country rather than figuring out a certain community, religion or caste.

The President said that while being proud of the victory, everyone should become more humble and prevent from being intoxicated by this victory.

He said that the entire province comes under the jurisdiction of the Chief Minister, and he is not a Chief Minister to a certain area and also not for a particular community, religion or caste.

The President called on the members to serve in general to the entire Province. He emphasized that character assassination is noteworthy in politics, and urged the members to refrain from such low grade acts.

Minister Susil Premajayantha said that after being elected as member of the Alliance, everyone has to adhere to the Constitution of the Alliance irrespective of the Party he belongs to.

General Secretary of the Sri Lanka Freedom Party Minister Maithripala Sirisena said that adhering to the policy and philosophy of the party is important when working together and expressing views. Party discipline and respecting the leadership are also important. He said that the victories so far achieved under the leadership of the President should be enhanced nationally as well as internationally. He called on them to work in unity.

Members of the Maha Sangha, Prime Minister D.M. Jayaratne, Party Leaders and many Parliamentarians were present at the occasion.(niz)

Home » Be humble and serve the masses – President