Beef is sold in Buddhist citadel of Kandy, pork is not 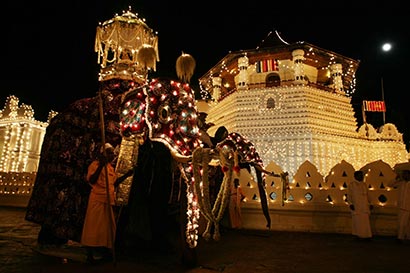 Kandy is special to Sri Lanka and the Sinhale Buddhists in many ways. It is where the sacred Tooth relic of Buddha is enshrined and a place of daily homage. The sanctity of Kandy and the entire Sinhale nation was preserved under Sinhale Buddhist kings. Animal slaughter was banned by all of Sri Lanka’ pre-colonial rulers by royal decree while Buddhism was State religion ever since Buddhism was brought to Sri Lanka by royal invitation and given royal patronage. No Government can take away that truth or play down that truth with political correctness or for political votes. Killing animals for food started with the arrival of the Portuguese and was legalized in 1815 by the British. Today, scores of meat stalls prevail in and around Kandy and they all sell beef but they do not sell pork. What does that show of who influences what is sold and eaten in Kandy and questions what the authorities in particular those tasked to and expected to preserve the Buddhist identity of Kandy is doing.

Kandy is referred to as the cultural capital. It is featured as a UNESCO heritage site. It was known originally as Senkadagalapura. Sri Lanka’s Buddhist space and Buddhist identity is getting diminished raising concerns of the outcome unless addressed. Political correctness has only left politicians rich and ready to compromise Buddhist space that does not belong to them and after doing the damage unashamedly reach out for Buddhist votes as well.

The situation is no different in Anuradhapura. The sacred city of Anuradhapura not only has meat stalls but scores of taverns selling liquor as well. In fact going round Kandy, one can easily count the liquor stalls.

India has recently brought up the subject of animal slaughter on the logic that Hindus that venerate the cow using it as a means of service and worship, the cow should not be subject to the axe and end up on the plate. The counter argument is that in asking for cows not to be slaughtered it is an affront to other religions that eat meat. Then we come to the question of reciprocity. Do countries that do not eat pork according to their religion allow pork to be eaten simply because people of other religions eat pork? Where there is no reciprocity there cannot be demands. Nevertheless what is surprising is that in Sri Lanka the minority religions eating habits has taken precedence. Beef is sold in virtually all supermarkets throughout the country in addition to meatstalls selling beef as well, yet few or hardly any supermarkets sell pork and when asked the automatic reply of these outlets is that it is because Muslims do not eat pork. When the majority of Buddhists and Hindus do not eat beef why is beef sold so openly? Even in restaurants and menus it is always the preference of Muslim dietary needs that come first. This is rather unfair in a country that forbid animal slaughter by royal decree, in a religion that regards all sentient beings as equals including animals and where both Buddhists and Hindus venerate the cow. How is it that the dietary demands of 9% of the population comes first?

Sri Lankan authorities need to realize that the country cannot be dictated according to the whims and fancies of people whether they be in government or those ready to give handsome payouts for the government to enact their fancies.

Then we come to the question of catering to meat eaters. The answer is simple – import. The example of kosher products also needs to be mentioned. The Jews who eat kosher products pay an additional amount for foods labeled as kosher and these are separately featured in supermarkets at an additional price or they are sold by Jews in exclusively kosher item shops. These kosher foods are generally imported from chosen destinations that vouch for their kosher standards. The Jews have at no given time demanded that people purchase kosher products with kosher labels simply because the Jews don’t eat other foods. They have created their own system that does not deprive the identity of the nations they live in or influence others to follow their faith and religion when it is contrary to that of the majority. This is a good lesson in the context of halal and it is a pity that the authorities for votes and other remunerations are dabbling with the subject.

4 Responses to Beef is sold in Buddhist citadel of Kandy, pork is not

Home » Beef is sold in Buddhist citadel of Kandy, pork is not