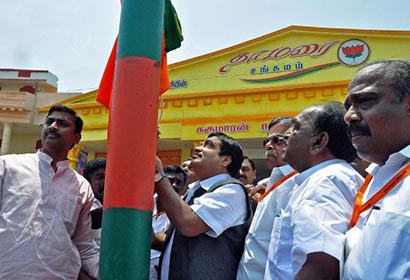 Nitin Godkari, the National President of the Bharatiya Janata Party, the main opposition of the Indian parliament said in Madurai Tamil Nadu that he had spoken to G.L.Peiris , the Sri Lankan Foreign Minister  and had told him that addressing the issues of “killing the Tamils” during the ethnic strife and ‘attacking the fishermen” from Tamil Nadu are two issues of primary importance to be addressed by the island nation for cordial ties between India and Sri Lanka.

The BJP Chief further said he had conveyed the message to the Sri Lankan Foreign Minister when he spoke to him prior to the visit of party colleague Sushma Swaraj-led MPs delegation to assess the rehabilitation measures for displaced Tamils.

The BJP chief also flayed the Congress and its southern ally DMK for failing to prevent “killings” of Tamils in Sri Lanka during the ethnic strife and “attacks” on fishermen from Tamil Nadu. The BJP is a party associated with the Jayalalitha led AIADMK, the governing party of Tamil Nadu, currently.

He slammed the Congress-led UPA and its southern ally the Karunanidhi led DMK on the Sri Lankan Tamils issue, and said the Centre should take all steps for the rehabilitation of internally displaced Tamils.

Training his guns at the ruling UPA at the Centre, BJP president Nitin Gadkari  said “bad time” for the Congress had started and his party-led alliance will capture power in the next Lok Sabha elections.

The country was suffering due to rising prices, growing unemployment, declining exports, corruption and poverty, Mr. Gadkari said. “If anyone has created this situation, it is the Congress-led UPA.”

“The wrong economic policies and corruption are making people’s life miserable. But don’t worry. The Congress’ bad time has started. BJP will come to power at the Centre”, he said in his inaugural address at the state BJP unit’s two-day conference Tamarai Sangamam here.

The BJP was working for a powerful, prosperous, terrorism-free India and the people were fed up with the “price situation, corruption and family rule” in UPA, he said.

The Vajpayee-led NDA government had envisaged a 12 per cent growth rate and ensured 9 per cent but this has decreased to 5.5 per cent under UPA rule, he said.

“The continued attacks on Indian fishermen has made a nuclear power like India become a laughing stock due to such attacks from a small country”, a resolution adopted at the state conference of the party’s state unit here said. It blamed the ruling Congress for such a situation.

India voting against Sri Lanka by supporting a US-sponsored resolution in the United Nations Human rights council for alleged war crimes was not enough and it should do more even as the country’s efforts to build 50,000 houses in Lanka was not on track, the resolution said.

“This conference condemns the Congress-DMK combine which has so far not bothered about the Sri Lankan Tamils,” it said, adding, the Centre should now take all steps for the rehabilitation of the Lankan Tamils.

Taking an apparent dig at the Congress, he said, the BJP was not a “mother-son or father-son party”, and that anyone can grow through the ranks to reach the top. Citing his own example, he said he had risen from being a grass root worker to being party chief.

Charging the Congress with trying to conspire to distance the BJP from minorities, especially Muslims, by branding it as communal and anti-Muslim, Mr. Gadkari said, the party was beyond any such divisions and recalled the candidature of A.P.J. Abdul Kalam being proposed for Presidential poll earlier.

Lauding the governance initiatives of states ruled by BJP or its allies, he said those like Gujarat, Karnataka, Bihar and Madhya Pradesh were doing well on various fronts, including power, water, crop insurance.

“Most of the awards by the Centre for governance are bagged by BJP or allies ruled states”, he said.