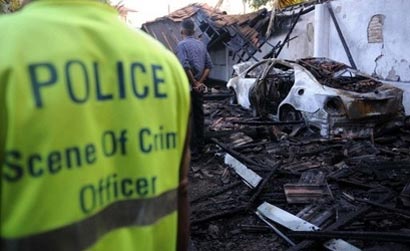 COLOMBO (AFP) – A key opposition activist in Sri Lanka was targeted at home by a bomb attack Friday as violence escalated ahead of next week’s presidential election.

The pre-dawn blast destroyed a car and severely damaged the home of Tiran Alles, a wealthy businessman and key ally of the opposition presidential candidate Sarath Fonseka. He and his family escaped unhurt.

“I heard a huge explosion and as I came out of my room I saw the house on fire,” Alles told AFP, pointing the finger at the ruling party for the attempt on his life. “They were obviously trying to kill me.”

The attack came amid tightened security as Sri Lankans prepare to go to the polls Tuesday to choose between President Mahinda Rajapakse and his former army chief Fonseka.

The opposition alleged Alles had been targeted because Fonseka’s campaign had released a photograph of Rajapakse’s eldest son Namal with a Tamil rebel leader at a London nightclub.

Rajapakse’s reputation as a war-hero president is staked on his victory over the Tamil Tiger rebels last year, who were wiped out in a huge government offensive after 37 years of fighting.

“Since the photograph showed some sort of a link between the president’s family and the Tamil Tigers, Alles had been receiving death threats,” the spokesman said. “Even yesterday, we complained that he could be targeted.”

Alles said forensic experts were going through the wreckage of his car and house at Colombo’s Nawala quarter, but he did not expect an impartial inquiry from the police.

Charred debris was strewn over the frontyard of the fire-damaged house and the roof had partially collapsed.

“I don’t expect anything from the investigation,” Alles said. “They will try to kill me before the election.”

Alles campaigned for Rajapakse’s victory in the November 2005 election, but fell out when a few dissidents were sacked from the government.

Since his fall from grace within the Rajapakse administration, Alles had worked with the opposition and was partly credited with arranging for Fonseka to come forward as a common opposition candidate.

“The attackers are believed to have come in a van and carried out the attack and fled,” a police official at the scene said, adding that no arrests had been made.

A total of four people have been killed and hundreds have been injured during campaigning in the run-up to the vote. The police have received more than 700 complaints of election-related violence.

The attack came despite a stepping up of security across the country following orders from Rajapakse to ensure a violence-free vote.

International concern over escalating election-related violence has poured in with United Nations chief Ban Ki-moon on Thursday expressing alarm over the increasing number of violent incidents and killings.

Ban urged all parties and their supporters “to show restraint and refrain from violence, to adhere to the electoral laws and rules, and to avoid provocative acts throughout the election period and its aftermath.”

The independent Election Commissioner Dayananda Dissanayake was quoted as saying Wednesday that he had stopped giving directives to the police and public officials who disregarded his orders for conducting a free and fair vote.

Rajapakse called the vote two years ahead of schedule to benefit from the government’s defeat of the separatist Tamil Tiger rebels after decades of ethnic warfare on the island.

But he faces a surprise rival to power in Fonseka, the former general who led the troops to victory in May.