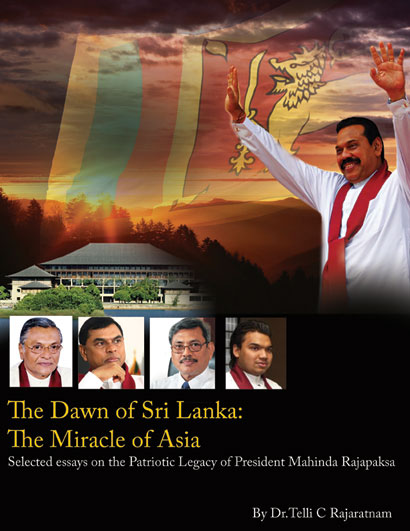 The Book titled “The Dawn of Sri Lanka, The Miracle of Asia –Selected Essays on the Patriotic Legacy of President Mahinda Rajapaksa” would be launched on January 23, 2012 at the Temple Trees at 4.30 p.m.

The Chief Guest would be His Excellency President Mahinda Rajapaksa. The Guests of Honour will Hon.Chamal Rajapaksa, Hon.Basil Rajapaksa, Dr.Gotabhaya Rajapaksa and Hon.Namal Rajapaksa. The News line SRILANKAN PATRIOT would be ceremonially launched after the launch of the book. The Diplomatic community, Members of Parliament, Religious Dignitaries would be amongst the guests. The author Dr.Telli C Rajaratnam would accompany his mentor and special Guests Mr.Ravimohan Surendranath Kumarakulasinghe Tissanayagam and Mrs. Ruki Ramanathan Tissanayagam, a well known icon in the development of the Arts, Music and Patriotism.

5 Responses to BOOK TO BE LAUNCHED ON JANUARY 23, 2012 AT TEMPLE TREES