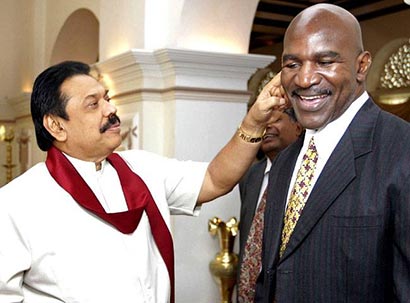 Former undisputed world champion in both the cruiserweight and heavyweight divisions Evander Holyfield who is on a visit to Sri Lanka called on President Mahinda Rajapaksa at Temple Trees this morning.

On June 28, 1997 controversial fellow boxer Mike Tyson bit off the top part of Holyfield’s right ear. The President during Holyfield’s visit to the Temple Trees also inspected his right ear.