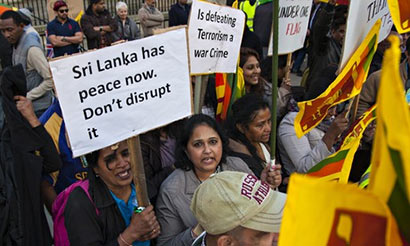 Britain is to join the US and three other countries in pushing for a full international inquiry into alleged war crimes in Sri Lanka after the government there failed to satisfy international calls for a such an inquiry, Downing Street announced on Sunday.

The prime minister’s office said on Sunday that Sri Lanka had failed to do so and the UK had joined four other countries in tabling a motion at the UN human rights council. It supports the call by the UN high commissioner for human rights for an international, independent investigation into violations of human rights and related crimes by both sides during the war.

A vote on resolution will take place at the end of this month.

A spokesperson for the prime minister added: “Ahead of the vote, we are working hard to secure support from other countries. The PM has personally written to a number of leaders whose countries are on the human rights council this session calling on them to support this resolution which would help to deliver progress on reconciliation and human rights in Sri Lanka.”

Sri Lanka in the past has refused to allow the UN unrestricted access to former war zones.

The Sri Lankan army crushed Tamil Tiger separatists in the final battle of a long civil war in 2009, in a strategy partly drawn up by President Mahinda Rajapaksa’s brother, the defence secretary, Gotabaya Rajapaksa.

About 300,000 civilians were trapped on a narrow beach during the onslaught and a UN panel has estimated that 40,000 non-combatants died. Both sides committed atrocities, but army shelling killed most victims, it concluded.

Since the end of the war, harassment of government critics, including attacks on journalists and human rights workers have continued. A heavy army presence in the former Tamil Tiger strongholds in the north of the country angers some local ethnic Tamils who feel they are treated as enemies of the state.

On Sunday, Channel 4 News said it had obtained new evidence which it, and Tamil campaigners, have said demonstrated that an underlying culture of systematic brutality and sexual violence existed within the ranks of the Sri Lankan military.

The footage, which was reported to have been filmed by a soldier on a mobile phone, was said to show troops laughing and cheering as they celebrated the deaths of Tamil insurgents and performing acts of grotesque sexual violation on the bodies.

The channel has continued to report on what it said was evidence, in the form of various pieces of footage, of the apparently systematic execution and sexual violation of prisoners.