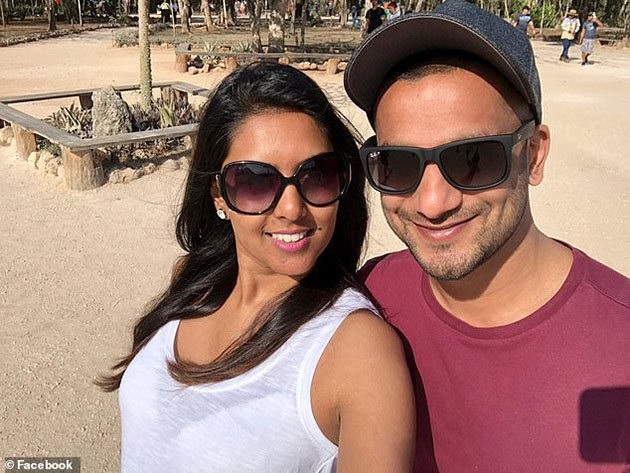 Sri Lankan police have banned a British newlywed from returning home after his wife died from dehydration on their honeymoon, the Daily Mail reported.

Khilan Chandaria, 33, and his partner Usheila Patel, 31, were married in Brent, north London on April 19, before jetting off on their honeymoon on April 23.

The pair had been staying at a five-star hotel in the coastal city of Galle and were rushed to hospital after Mr Chandaria noticed a ‘smell’ in the room.

His wife was later pronounced dead and a devastated Mr Chandaria cannot leave until more tests are performed – despite not being charged or arrested.

Today Mr Chandaria’s mother said he was still in Sri Lanka and claimed that her husband was also out there alongside her son.

Speaking from her home in north London today she said: ‘My son is too ill, he is unwell’.

It comes as Mr Chandaria spoke of his treatment in Sri Lanka.

He told The Sun: ‘The authorities are not treating me as a culprit but aren’t treating me like a victim either. I don’t want to leave without her.

‘I still talk to Usheila at night when I look at the stars. She was supposed to be with me for the rest of our lives.’

Mrs Patel’s parents said: ‘Two healthy newlyweds left for their honeymoon and days later our beautiful daughter has left us. From cloud nine to a living hell. Just want to see our beloved daughter one last time.’

This morning, neighbours of Usheila and her family said they believed the family may have gone to Sri Lanka.

One neighbour said: ‘I’ve only just found out yesterday.

‘I don’t know what happened. It’s a bit sensitive isn’t it – she was a lovely girl’.

The couple married in Brent, North London, on April 19, before travelling to Sri Lanka for a two-week, £6,600 trip.
Whilst at Heathrow Airport the pair purchased vodka and Sprite.

After arriving at the £100-a-night hotel, Mr Chandaria said he had noticed a ‘smell’ in their room.

A cleaner attended and after the maintenance team left, the couple shared a sandwich and chips.

The pair both felt sick shortly after, with Mr Chandaria saying he and his wife were ‘feverish and vomiting blood’.
The couple phoned for help at around 3am and three staff came with a wheelchair before the newly weds were rushed to Co-operative Hospital, according to Mr Chandaria.

His massage therapist wife was then transported to the city’s Karapitiya hospital.

While previous reviews of the hotel mention food poisoning, a spokesperson for the hotel told the Sun that it was recognised for its food safety last month.

Russell Cool confirmed the couple dined inside and added that other items they ‘obtained from outside and consumed’ have been given to investigators.

The Foreign and Commonwealth Office said: ‘We are supporting the family of a British woman who has died in Sri Lanka… and are in contact with the Sri Lankan authorities.’

The couple met on dating app Tinder before going on a date to the Finchley Lido cinema to watch London has fallen, which was released in 2016.

They started dating officially in March that year and two years later Mr Chandaria asked Usheila to be his wife, they were married on April 19.