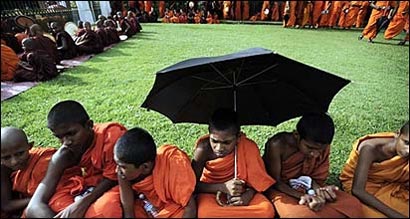 It is necessary that the new generation of Buddhist monks in Sri Lanka learn the Tamil language to help reconciliation between communities after decades of war, teachers of Buddhist scripture say.

All Island Pirivena Teachers Association (AIPTA) made of teachers of Buddhism told BBC Sinhala service, Sandeshaya that the Buddhist monks should be able to communicate with the Tamils in Sri Lanka.

“They should be able to communicate in Tamil and spread the message of peace to the Tamil community,” said Kompitiye Suseela thero, president of AIPTA.

The thero expressed hope that Buddhist monks communicating in Tamil will help prevent another bloody conflict in Sri Lanka.

The AIPTA says the government should pay attention to the immediate needs of the Pirivena education at a time it is celebrating 2600 anniversary of Sambudhdhathva Jayanthi, Lord Buddha’s enlightenment.

Pelmadulle Dhammika thero, the general secretary of the AIPTA, meanwhile, stressed the importance of teaching other international languages such as English to the novice monks, in addition to Tamil, to face the challenges of the 21 century.

“Pirivena is the best place to do that,” the thero said.

Tens of thousands of young Buddhist monks, as well as lay students, study at over 720 Pirivenas, the oldest specialist Buddhist education establishment in Sri Lanka.

There are many serious issues related to developing the Buddhist educational system that need immediate attention of the president, says the AIPTA.

The decades-old salary and allowance systems need to be upgraded and the facilities in many rural Pirivenas are not suitable for the next generation of monks to have a proper education, it says.

The Association says that there has been no positive response from President Mahinda Rajapaksa for over two years for a meeting to discuss these issues.

“The government can easily sort these issues out at a time where billions of rupees are being spent for mega projects in Sri Lanka,” said Kompitiye Suseela thero.