Buddhist policy is to resolve conflicts without destroying lives – President 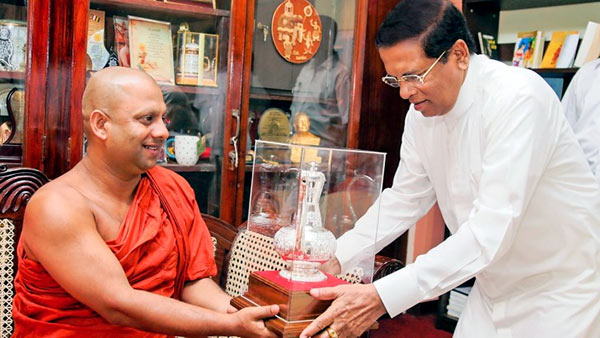 “President Maithripala Sirisena has an immense capability to overcome critical challenges faced by the country. He is the only leader who can give a solution to the national issue, with an agreement of all communities”, says Ven. Medagoda Abhayathissa Thero, senior lecturer of Sri Lanka Pali and Buddhist University.

Ven. Abhayatissa Thero made these remarks at the Katina ceremony and the religious ceremony held to open newly built Vahalkada and seminar hall of the Raja Maha Viharaya of Sunethra Devi Pirivena in Pepiliyana on 29th October.

The religious ceremony was held under the patronage of President Maithripala Sirisena.

President Sirisena, speaking at the ceremony said it was the Buddha who deeply discoursed about the conflict resolution. “Though there are various methods for conflict resolution, the Buddhist policy for that is to do it without destroying the lives of anybody”, he said.

Recalling the recent meeting with the President, Ven Abayathissa Thero said that the views expressed by the President after listening long time with patience for him and the delegation, is evident of his feelings towards this country and its people.

Ven Abayathissa Thero recalled that President has told him and his delegation that even though it could be the politicians who create conflicts between the largest ethnic group and minority communities, since we gained the independence, there is a   root cause which they can be used to create conflicts, and it is his objective to remove this root cause and to create an environment where all the communities could live in peace.

The President who arrived in the temple was welcomed by the Pirivenadhipathi of Sunethra Devi Pirivena, Professor at Sri Jayawardenapura University Ven. Medagoda Abhayathissa Thero and a benefactor of the temple Mahela Perera.

President Sirisena opened the Vahalkada by unveiling the plaque. The Vahalkada was built by Mahela Perera and Mrs. Dilshani Wijeytunga, in memory of their mother.

The President presented a souvenir to Ven. Medagoda Abhayathissa Thero.