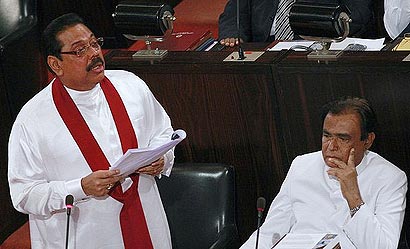 The 2011 Budget has given many concessions in the form of tax reduction, tax removal, tax holidays etc., which would encourage the private sector to expand their activities and create confidence for investment and open up new ventures.

This was stated by the Managing Director and CEO of the Chevron Lubricants Lanka PLC., Mr. Kishu Gomes, participating in the ‘Asidisi Viduvath Hamuwa’ Media Conference at the Ministry of Mass Media and Information Thursday

He said that the budget while addressing the grievances of the public sector employees has taken every possible measure to encourage the private sector to become partners in the development of the country. He said that the private had reservations about the objectives of the government and proposals introduced. The steps taken in the budget clears all these reservations and encourage the private sector to augment their activities in sharing the development activities of the government.

Mr. Gomes commended the government for having taken into considerations the suggestions made by the Chambers of the private

sector in revising the tax structure. The reduction of tax on profits from 35 to 28% will encourage the private sector entrepreneurs to invest more funds in local industries. He said that the reduction of the PAYE tax to 24%, increase the base rate to Rs. 600,000 per annum and exemption of terminal benefits from taxation are commendable measures taken through the budget and this would benefit a large number of private sector employees.

He also praised the action being taken to increase tax on raw exports to encourage value added productions, and removal of VAT and tax holidays given for many spheres of the private sector. He said the budget is a private sector friendly budget that would indeed create upsurge investment and expansion of private sector activities.

Mr. K.D.Ranasinghe, Economic Research Director of the Central Bank addressing the media said the proposals presented in the budget have been introduced with a long term vision for the development of this country. He said that Sri Lanka’s economy has shown a significant progress and this budget would consolidate and expand the development. He provided statistics to confirm the progress made in various sectors of the economy which included economic growth rate achieved to near 8 percent, inflation stabilized at around 6 percent, poverty reduced to 7.6 percent, unemployment to 5 percent and foreign reserve

President of the Sri Lanka Foundation Institute, Professor Ranjith Bandara said that for the last 33 years the country did not have concrete proposals for achieving targets and budgets hitherto was presented to add one vegetable to the plate of rice. This budget however, had added 3 vegetables for our children. The budget has targeted to increase the per capita income to U.S.$ 4,000, and increase the GDP growth to 8 – 10%, under 4 programmes which are improving private and production sector, public and private sector joint manufacturing, improvement of the public sector, and implementing institutional changes required. He said that institutional and structural changes proposed in the budget are very significant, as it would encourage investors and entrepreneurs. Steps have also been taken to change BOI procedures and minimize delays. He said that while providing incentives to encourage private sector industrials the government has also taken due care to fulfill its social responsibilities by enhancing Samurdhi facilities and increasing the salary and cost of living allowance of the public

Responding to a question about the facilitating of opening capital accounts, Mr. Ranasinghe of the Central Bank said that in the past opening up of capital accounts were restricted since the country could not afford outflow of foreign exchange as the foreign exchange reserves of the country was very little. But presently this reserve has increased to a record U.S.$ 7 Billion and there is every possibility by permitting to opening these accounts the inflow of foreign exchange would surpass by many fold than the outflow.

In response to a question about price increases Prof. Ranjit Bandara said that the import and local trade is completely in the hands of the trading community having being destroyed the controlling mechanisms by the previous governments. He expressed the hope the re-establishment of Sathosa, Co-op outlets, Paddy Marketing Board etc, would help to address this issue eventually and satisfactorily and break the monopoly being held by certain trading sectors. (niz).