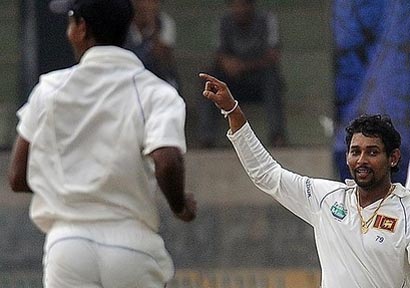 COLOMBO (AFP) – Part-time spinner Tillakaratne Dilshan bagged two wickets in one over in fading light to boost Sri Lanka’s hopes of gaining the lead in the second Test against the West Indies on Thursday.

The off-spinner dismissed well-set Darren Bravo (80) and Brendan Nash (29) before the West Indies reached 165-5 in their first innings at stumps on the third day in reply to Sri Lanka’s 387-9 declared.

Carlton Baugh was unbeaten on four and Dwayne Bravo on one not out when play was called off in the final session due to bad light.

Darren Bravo smashed four sixes and five fours in his attractive 129-ball knock before being superbly caught by Rangana Herath at point, just a delivery after Nash was trapped leg-before by Dilshan.

Bravo, who scored 58 in the drawn opening Test, steadied the innings with an an 83-run stand for the fourth wicket with Nash after three wickets, including that of Chris Gayle (30), fell for 77 runs.

“It was a fantastic effort. Dilshan has got that little magic touch and when he comes on to bowl he just manages to do something,” said Sri Lanka captain Kumar Sangakkara.

“He got two wickets at a crucial stage and we now have the opportunity to come back and put the pressure on. There’s quite a lot of time left in this match and if we bowl well in the first session tomorrow we can set it up.

“We wanted a wicket with the new ball and the pacemen gave us two. Getting Gayle’s wicket was a huge blow to the West Indies and really put us on top.”

Sri Lanka put the West Indies under pressure when they removed openers Adrian Barath and Gayle in the opening 12 overs before accounting for Shivnarine Chanderpaul.

The West Indies made a poor start when they lost Barath (three) in the third over, trapped leg-before by paceman Nuwan Kulasekara. They suffered another blow when Mendis trapped Chanderpaul (eight) leg-before.

Sri Lanka earlier added 93 runs to their overnight total of 294-5 before declaring their first innings closed.

West Indies fast bowler Kemar Roach finished with 5-100, his second haul of five or more wickets in a Test innings.

Sangakkara, struck on the helmet by a Roach delivery, pulled the next ball for a four and then reached his 150 with a fluently-driven boundary through the covers.

The Sri Lankan captain fell in the next over, caught at first slip by Gayle while attempting to drive seamer Darren Sammy. He cracked one six and 18 fours in a 268-ball knock for his 24th Test century.

Roach nearly got a wicket when Jayawardene top-edged an attempted cut, but Gayle failed to hold a difficult high chance at first slip when the batsman was on 25.

Jayawardene failed to make the most of the chance and could add only nine more runs before being bowled by Benn.

Roach was again the unlucky bowler when Barath dropped Herath at square-leg when the batsman was on 21. Herath remained unbeaten with 24.

But he struck in his next over when Kulasekara (17) cut the paceman straight to Dwayne Bravo at deep point. He took his fifth wicket when he bowled Mendis (two) with a full-toss.