Cabinet Reshuffle – Raise the bar in evaluating quality of Ministers 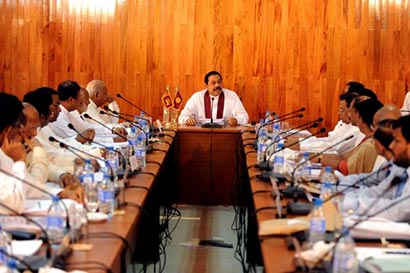 In a democracy, the people’s will is said to be exercised through its elected representatives. We know all too well how far elected representatives actually honor that duty. Be that as it may, it is abjectly clear that and no one would disagree that we lack quality in the people we vote for office. When the good are reluctant to take to politics and with little alternative left there is little alternative we need to address areas that can be improved.

One of the key factors to be taken into account when looking at our representatives in parliament is that though some have very colorful educational qualifications another set do not, while some have enjoyed the best of local and even foreign education, others have not, while some are eloquent in both local and English language others know only one language. This brings to mind how prior to 1956, permission had to be sought to speak in Sri Lanka’s parliament because every debate took place in English.

Every action, inaction, delayed action, wrong action by the Ministers, their secretaries and downhill has been as a result of their inability to equip the nation’s assets – the people with the tools that would not only personally uplift their status but would in turn help the nation rise as well. That they have not is because they do not have the background to realize the international-national dynamics of things nor do they care to learn.

It cannot be stressed enough that we need to improve the quality of our representatives in Parliament, in the Provincial Councils and all areas where public service reaches out to the public. Given the inundated misadventures we read about our politicos we can but wonder what criteria the General Secretaries of these political parties use in their selection!

Key Ministers especially at cabinet level need to have a strong foundation of what Sri Lanka’s history is, where our culture has derived from, the importance of Buddhism and its protection, links with Buddhist Asia as was the case in the pre-colonial period, international affairs, the dynamics of geopolitics, how events and people shape discourse and actions – these and more need to be taught by our own learned people in an indigenous course designed to ensure that Ministers do not make fool of themselves or Sri Lanka in public.

We are a country that is part of a global village, our economy is nothing that can generate a “don’t care” attitude, our people have not valued what is local primarily because we have been slaves to colonial rule for over 450 years. Our minds certainly need to be decolonized. Be that as it may no part of Sri Lanka’s education system and especially its policy makers have succeeded to strategize on how best our education can be designed so that while a prominent place should be given to English education (applicable to all) that the history, culture, traditions and language of both Sinhalese and Tamil is not neglected. This failure falls on the shoulders of all education policy makers both past and present.

From one mistake they step into another. One program gets replaced with another half completed leaving students in disarray. All these clearly indicate a lack of vision in policy making. The latest coming from the education ministry is of abolishing national schools – without thinking of the repercussions to the service that national schools have rendered over the decades in nurturing students. Given that the Sinhalese are 3rd place in terms of population, if all Colombo schools removed the distance/ratio admission criteria what would happen to the Buddhist schools like Ananda, Nalanda, Visakha, Devi Balika, Museus College, Buddhist Ladies? Similarly there are other such Tamil schools who would not want to change aged old traditions – ones they are proud of and they have every right to be. Education is not anything that Ministers have any right to experiment with.

In one stroke of the pen, the legacy of Colonel Henry Olcott and the Buddhist Revival Movement in nurturing students within a sound Buddhist school environment would be lost forever. The pioneers of Buddhist education in the British colonial period commencing in the late 19th century strived hard against heavy odds and competition from the then colonial Government backed missionary schools to preserve Buddhist Schools in Sri Lanka.

Now there is a proposal for the multiculturalizing of reputed Buddhist schools. Will this not be a blow to the whole Buddhist educational movement? The stalwarts of Buddhist education such as Anagarika Dharmapala, D B Jayatilleke, P de S Kularatne, Professor G P Malalasekera, L H Mettananda, S A Wijayatilake and the like would be forgotten and recede from memory. We cannot forget the Sinhalese Buddhists whose education in these national Buddhist schools have ensured that they continue to serve the cause of Buddhism in their adult life as members and office bearers of leading Buddhist Societies and Associations. The gavel cannot come down just because of the word “multiculturalism”.

The Government must think hard before any steps are taken to change the identity of Buddhist schools given its unique role in the pre and post-independence period of producing national minded and patriotic students committed to uphold and preserve Buddhism and its way of life in the country.

One of the most tragic debacles we face as a nation is to continue to cling to a sub – servient colonial mentality and think that the West have the best solution to all the maladies and it is because our people lack the proper background to take informed decisions that are best for the country that leads them to make the mistake of following dictates of NGO representatives – leading to bigger calamities in the future.

Many of the international debacles we have suffered of late fall squarely on the shoulders of the External Affairs Ministry head who has shown little merit in the role handed to him to address and at least extinguish the flames lit – most often by his own Ministry. The country has been forced to pay dearly for his blunders one after another displaying a clear lack of vision and foresight.  We expect much more of a Minister handling such an important post than being able to deliver eloquent speeches and indulge in hair splitting word games. This unfortunately has been the hallmark of a Ministry that is expected to do far more than it has. We need task masters to hold such portfolios. Just one example of tardiness of action is the manner how Maldives brought amendments to its laws prohibiting non-Muslim religious items to be brought into Maldives in 2008. This is a country that was once a Buddhist nation ruled by mainly Sinhalese migrants. Its current language Dhivehi is an Indo-Aryan language closely related to the Sinhalese language.

Sri Lanka opened its doors wide open to Maldivians when fears of its islands going underwater emerged, Maldivians take up residence in Sri Lanka, they are given admission in schools, good health care and medical treatment, they engage in employment and when its museum was attacked recently purposely to remove all the traces of Buddhist artifacts what did the Sri Lanka External Affairs ministry especially its Minister do? The Buddhists of this country were shocked by this incident and were dumbfounded when our Minister in charge said nothing not even making a feeble protest. The absence of the likes of Lakshman Kadrigamar in such high profile post is deeply felt today. Cabinet reshuffle certainly needs to look at this key Ministry.

There are certainly many ministries that need to be scrutinized. We are all aware of the hiccups galore in the health sector – Senaka Bibile’s drug policy is still turning the bend and in the meanwhile one controversy over another engulfs a key sector that should not be ignored or neglected. We have a food ministry that has yet to address the mafia network in the supply and distribution of food and why vegetables brought from farmers at a paltry price is sold to us at 3 folds the cost because of the middleman pocketing the profits.

It is time that the Ministries where key decisions take place which have been handed over to minority radicals and extremists on the basis of their coalition partnership and minority vote banks has generated anything but harmony. No ministry must be held by a minority leader who thinks only of advancing the status of the minority that he belongs to totally disregarding the rights and freedom of all others.

We have key ministries that seem clueless about the need to safeguard our natural resources and our environment. Are we to ignore the repercussions of fiddling around with our ecosystems and being an island nation and victim of a tsunami do we not know how some of the actions will affect us – technology enhanced fishing is one such example of an impending calamity because these machines will not only affect the seabed but also damage the coral reefs.

The areas to be reviewed are many. The minister’s first need to be knowledgeable about Sri Lanka and also be given a very strong understanding of international affairs and the dynamics of how political thought and strategy takes place. The types of debate Opposition and Government have on topics must be purely based on the subject matter and not personal snide. Parliament cannot become a circus.

Raising the bar when appointing Ministers should be a top priority because the majority of flawed decisions being made is as a result of their lack of knowledge, education and sometimes spine to make the right decisions with a proper vision.