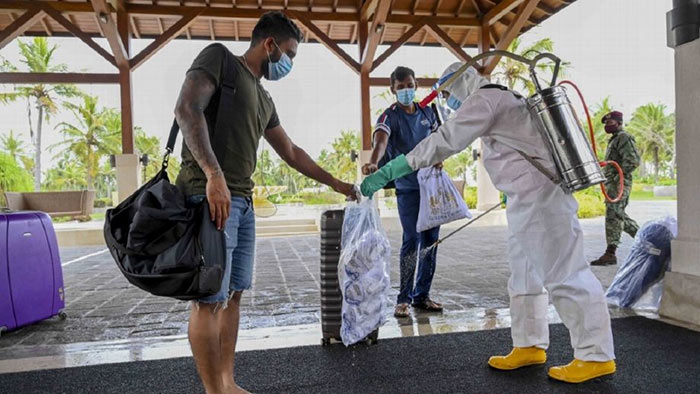 It seems almost ludicrous now, but between 2009 and 2014 no T20 team was more dynamic than Sri Lanka. Their win/loss record during those five years (34 wins, 19 losses) was comfortably the best in the world. In World T20 tournaments, they were the most dominant, making three finals in four campaigns, before winning in 2014.

And there was an innovative magic here. A sense that as even Tillakaratne Dilshan reverse-slapped his way through the powerplay, or Ajantha Mendis bewitched an opposition top order, yet more adventure lay in wait. Often it did. Rangana Herath, though almost rigidly orthodox on the surface, would make abrupt appearances in must-win games to wrestle oppositions to the ground. Test-match fields (short leg, slip, leg slip) and would be transposed so exactly on to a T20 field, it felt like the whole stadium had entered a fever dream. Sri Lanka were not unbeatable, but damn were they good. And man were they good to watch.

How much they have slipped in six years. Sri Lanka would have had to qualify for this year’s T20 World Cup, had it been played in October as originally scheduled. Since the start of 2017, they have lost twice as many T20 matches as they have won, and a good portion of even these victories were built upon the bowling of Lasith Malinga, who has increasingly seemed a weathered monument to the golden age. In too many matches, Sri Lanka are not only outgunned on paper, they are also out-scrapped, and – here is the clearest sign of decline for a Sri Lanka side – out-thought.

That Sri Lanka’s domestic cricket is poor preparation for international cricket is known, but of the three formats, none has been so wantonly neglected as T20. In some years – as in 2018 – Sri Lanka Cricket has organised club-based T20 tournament contested by as many as 23 teams, meaning no fewer than 243 players featured in each round. The result was a competition of embarrassingly diluted quality.

In years in which more of an effort has been made, the pinnacle T20 competition has been a hastily dashed together “provincial tournament” in which 60 players are more-or-less haphazardly funnelled into four teams. When these tournaments happen, they last less than two weeks. While almost every other major league in the world, from the Caribbean Premier League to New Zealand’s Super Smash has grown in either length, quality or both, Sri Lanka has persisted with what are essentially glorified intra-squad practice matches of vanishingly modest benefit to both board and players. Overseas, the likes of Jasprit Bumrah, Shadab Khan, Adam Zampa, Evin Lewis, Hardik Pandya and Tom Banton have built careers on the back of T20 league performances. In Sri Lanka, national selectors have largely ignored the results of whatever competition had been cobbled together that year.

That Sri Lanka will finally get a T20 franchise tournament off the ground in 2020 of all years, epitomises the nation’s cricket. Baffling as it is that it has taken this long for a franchise tournament to be attempted, there is also appreciation of the slap-dash brilliance in having organised one in the year a pandemic rips across the planet.

There must also be managed expectations, however. The Lanka Premier League will not suddenly undo years of active harm on the domestic cricket front. This league is only 21 days long, has a hectic schedule with double-headers on most days, and will all take place on a single ground. Teams have had practically no time to prepare and plan, and the best on-paper side – Colombo Kings – only got their coach in the week before their first match. Many foreign players may be walking straight out of quarantine into their first match. And the tournament is almost certain to lose money.

But then, so what? The first rains after a drought don’t have to bring a downpour. That such a tournament is even starting is enough, for now. Sri Lanka stood on the brink of T20 oblivion, driving bullock carts while other teams rode bullet trains, the format’s data revolution having almost totally passed them by. Now, finally, the island’s cricket is being invested in – franchise owners hailing from as far afield as Canada and the United States, in addition to UAE, Pakistan and India.

Whatever its cricketing quality, there are two areas in which the tournament cannot compromise. It cannot be tainted with corruption, for starters. Not only has Sri Lankan cricket been subject to a substantial anti-corruption investigation over the last five years, SLC’s previous T20 franchise tournament – 2012’s Sri Lanka Premier League – had been riddled with credible corruption allegations, which led to the downfall of that league after a single iteration. Second, it is vital that cricketers are paid the fees they expect, for without buy-in from foreign players, future versions of the LPL will not draw the funds from sponsors and broadcasters that will sustain the league.

And this year, putting down that bedrock of trust this is really what the LPL is about. It does not necessarily have to be a stellar tournament. It only has to ensure it returns next year, and then the year after that, to stand a chance of reversing Sri Lanka’s T20 descent.