Can Sri Lanka dig itself out of a $50 billion debt? 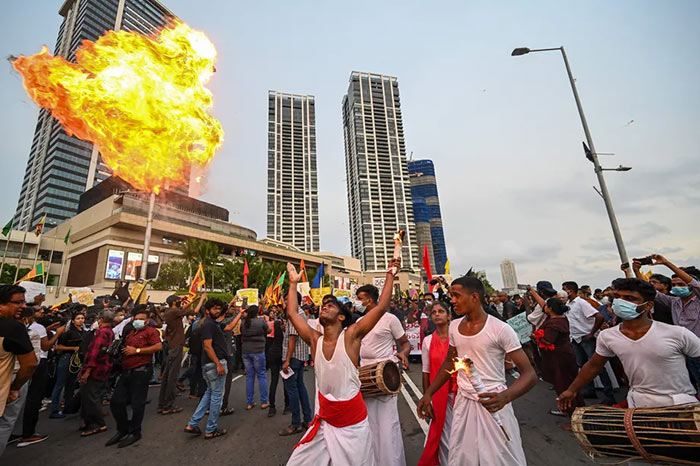 After a month of intense civilian-led protests over Sri Lanka’s deteriorating economy, President Gotabaya Rajapaksa agreed to appoint a new council on Friday to lead the formation of an interim government. The resolution would create a coalition made up of all parties in Parliament and would remove the grip of the Rajapaksa family dynasty currently ruling the country. At issue is the country’s economic future which is in shambles after defaulting on payments on its mountain of foreign loans – estimated to be worth $50 billion – for the first time since the country gained independence from the British in 1948.

Signs of Sri Lanka’s impending economic crisis became increasingly apparent over the last two years of the Covid-19 pandemic as food prices soared and power blackouts increased in frequency. Sri Lanka currently has about $7 billion in total debt due this year.

Many attribute Sri Lanka’s economic crisis to the mishandling of its finances by successive governments through mounting foreign debt and continued infrastructure investments. The Rajapaksa administration also implemented sweeping tax cuts in 2019, slashing the value added tax (VAT) rate – the tax applied to imports and domestic supplies – from 15 percent to eight percent which contributed to a decrease in the country’s revenue.

The president’s older brother, Mahinda Rajapaksa, is expected to be removed as prime minister as part of an agreement brokered by former President Maithripala Sirisena, who defected with dozens of other members of the incumbent president’s governing party in April in protest of the Rajapaksas’ poor governing.

But the country’s power struggle may have sown discord between the two brothers which could exacerbate its political impasse. On Friday, the Associated Press reported a spokesperson for the prime minister did not immediately confirm the elder Rajapaksa’s removal, saying that any such decisions would be announced by the prime minister in due time.

The country continued to mount foreign debt without sufficient revenue

A big part of Sri Lanka’s economic woes is its ballooning foreign debt, namely to fund its aggressive turn to infrastructure development under former President Mahinda Rajapaksa, the elder Rajapaksa sibling and two-time prime minister. With its finances already bleeding, Sri Lanka took out major investment loans from state-owned Chinese banks to fund its infrastructure projects including a controversial port development in the Hambantota district.

The Sri Lankan government justified the Hambantota project as a way to grow its economy as a bustling trade hub comparable to Singapore. However, the project was riddled with corruption and stalled, and Sri Lanka eventually handed over the port’s control to China as collateral after it was unable to pay back its loans.

Over the last decade, Sri Lanka amassed a debt of $5 billion to China alone, making up a large portion of its overall foreign debt, according to the BBC. Sri Lanka’s bloated debt to China and the Hambantota project failure are often held up as an example of the “debtbook diplomacy” that China has pursued in the last couple of decades.

Some believe China has expanded that monetary diplomacy approach through its ambitious Belt and Road Initiative (BRI), a global infrastructure project involving Chinese investment in infrastructure developments in parts of Asia, Africa, and Europe that is later repaid, as part of China’s bid to increase global influence as a growing economic power. About 139 out of 146 of the world’s countries, including Sri Lanka, have signed on to China’s BRI project. While an infrastructure project on such a global scale may provide some economic benefits to the participating countries, the BRI has inevitably become a strategic way for China to gain political leverage with economically vulnerable countries across the Asia-Pacific region. At least 16 countries involved in the BRI project have been saddled with billions of dollars of debt which China then has leveraged, according to an independent analysis by Harvard’s Kennedy School for the US State Department.

About 22 percent of Sri Lanka’s debt is owed to bilateral creditors – institutional investors from foreign governments – according to CNBC. Neighboring India has sought to grow its bilateral cooperation with Sri Lanka partly as an attempt to secure its influence in South Asia over China. India recently gave Sri Lanka a $1.5 billion credit line to tide over the country’s fuel crisis in addition to another $2.4 billion through a currency swap and loan deferment since January.

As the country amassed foreign debt, its tourism sector – previously a $44 billion industry and a primary revenue source for the island – took successive hits. In 2019, tourism suffered after a series of church bombings that killed nearly 300 people, including some foreign nationals.

The next year, the Covid-19 pandemic halted tourism and other major sectors, spurring a global economic downturn. Although Sri Lanka saw some increase in its number of foreign visitors last year, the ongoing pandemic combined with Russia’s invasion of Ukraine – both nations leading sources of tourism for Sri Lanka before the conflict – continued to slow the industry’s recovery.

The country’s issues escalated in March when the Sri Lankan government announced a 13-hour daily power cut as a way to save energy amid the ongoing crisis. Without sufficient power, many were unable to do their jobs as the economic crisis continued, prompting mass unrest. Thousands of Sri Lankans took to the streets in the weeks following the power cut to protest the country’s growing crisis.

On April 1, President Rajapaksa declared an emergency as growing unrest saw protesters clash with police. The entire Sri Lankan government Cabinet resigned in protest not long after the emergency law was implemented, causing Rajapaksa to revoke the law. Among those who resigned was Sports Minister Namal Rajapaksa, another member of the Rajapaksa family and the president’s nephew.

With growing political unrest and no resolution in sight, Rajapaksa’s rivals began calls for a no-confidence vote against his administration.

“We are confident we have the numbers and we will bring the motion at the appropriate time,” opposition lawmaker Harsha de Silva told CNBC. Hoping to placate critics, President Rajapaksa sought to form a new unity coalition under his leadership but failed to gain support. In April, the government also announced it would temporarily suspend foreign debt payments, marking the first time Sri Lanka had defaulted on foreign loans since its independence.

Experts had been warning of a potential dire situation around the country’s finances for some time. When the country defaulted, the government had been negotiating a bailout plan with the International Monetary Fund, which had assessed its accumulated debt as unsustainable.

“The government intends to pursue its discussions with the IMF as expeditiously as possible with a view to formulating and presenting to the country’s creditors a comprehensive plan for restoring Sri Lanka’s external public debt to a fully sustainable position,” the Finance Ministry said in a statement.

In a meeting with Cabinet officials a week later, President Rajapaksa acknowledged his government’s role in the country’s declining economy. Specifically, the president said the government should have approached the IMF earlier for support in tackling its unruly foreign debt and that they should have avoided the ban on imported chemical fertilizers which was meant to preserve Sri Lanka’s foreign exchange holdings but instead hurt its agricultural production.

“During the last two and a half years we have had vast challenges. The Covid-19 pandemic, as well as the debt burden, and some mistakes on our part,” Rajapaksa said.

Now, Sri Lanka’s future rests on whether the president’s proposed government changes will placate his growing opposition long enough for a solution to come through from the IMF. The Sri Lankan head of finance, Nandalal Weerasinghe, has stated that such a hoped-for deal could still be months away, however.

4 Responses to Can Sri Lanka dig itself out of a $50 billion debt?

Home » Can Sri Lanka dig itself out of a $50 billion debt?