At some point in time throughout the past decade or so members of the Tamil National Alliance have been very liberal in the use of two words – Genocide and Colonization. The liberal use of the two words has naturally been picked up by media, human rights advocates and others resulting in a diatribe of allegations and hyped propaganda with none bothering to verify and validate before using the terms. Usage of the two have contributed to strong clauses in the resolutions lobbied against Sri Lanka at the UN and thankfully a commoner has come forward to seek the courts assistance as to the manner attempts are afoot to cause disunity to two communities to get one with their lives following the defeat of terrorism. Those that claim genocide by Sri Lanka must also answer why did LTTE kill Tamils? The list of Tamils killed by LTTE include the very popular Foreign Minister Lakshman Kadiragamar, entire moderate Tamil politicians, scores of Tamil police men, Tamil academicians, Tamil public servants and officials. In fact LTTE’s and Prabakaran’s first assassination was to kill a Tamil Mayor – Alfred Duraiappah.

Genocide as set out in the Convention on the Prevention of Genocide (Article 2) means any of the following acts committed with the intent to destroy, in whole or in part, a national, ethnical, racial or religious group:

Over the years reference to genocide came from multiple forces.

From overseas the usage of ‘genocide’ and ‘colonization’ have been turned into commonly used terms. Even a single death ends up referred to as ‘genocide’. The internet is full of reference to Sri Lanka’s ‘genocide’ ‘colonization’ to such an extent that even adjectives have been added to create flavour. So you will read about ‘structural genocide’ ‘systematic genocide’ ‘military colonization’ ‘development colonization’ etc. The number of websites and campaigns run against ‘genocide’ and ‘colonization’ are too many to count as are the facebook and other social media pages. Who are funding these campaigns, websites and what is being done with the money poured in as contributions and donations and have those contributing or even agreeing to make statements ever bothered to find out if there was any truth in these claims?

It is evident that a lot of people in position and holding important official titles have also used the term ‘genocide’ and ‘colonization’ thus also contributing towards a very biased, unfair and unethical scenario that tied with big dollar funded campaigns have created an impression that the Sinhalese people have killed and continue to kill Tamils in Sri Lanka.

Thus, Professor Clelila Bartoli who spoke at the Tamil Youth Organization event in Italy in 2012 and analysed the genocide on the Tamil nation must explain what type of ‘intended genocide’ took place in Sri Lanka given that she specializes in Human Rights. 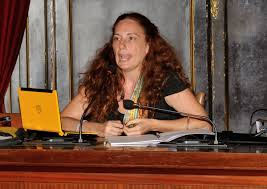 Similarly Sergio Cipolla of the CISS, a development NGO and Prof Provenza of Amnesty International, should also explain how they concluded that the UN failed in their responsibility in preventing the genocide.

A Sinhalese traveling to the North ends up with letters written to the UN complaining ‘colonization’. No one seems to take a foot back and ask some simple questions.

Increase in Tamils relocating outside of the North especially to the South of Sri Lanka – If Tamils are increasingly purchasing lands, property, building condominiums and flats that they openly and without remorse or embarrassment say is meant only to be rented to Tamils, is it not wrong for Tamils to oppose when Sinhalese wish to purchase land and start business and live in the North?

Some examples of how ‘genocide’ and ‘colonization’ has been loosely used 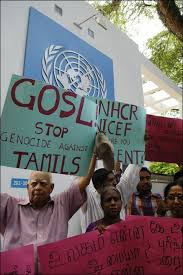 Reception hosted by the British Tamil Conservatives at the Castle Fine Art Gallery in the International Convention Centre in Birmingham. Member of Parliament Robert Halfon also addressed the crowd, telling his fellow law makers that  “Tamils have been victims of genocide and deserve the right to have their own nationhood.”

“The Tamil people strongly believe that they have been, and continued to be subjected to Genocide by Sri Lanka…..We request the OHCHR investigative team to look into the pattern of all the atrocities against the Tamil people, and to determine if Genocide has taken place.”

“I plead with you to bring a Commission of Inquiry to investigate war crimes, crimes against humanity, Genocide, and all other violations and crimes against the Tamil people. “

June 2014: former Tamil Nadu Chief Minister, Jayalalitha makes 4 demands from Indian Prime Minister Narendra Modi. The first is “India should move a resolution in the United Nations calling for a probe into genocide of Tamils during the final phase of the Eelam War.”

All Party Parliamentary Group for Tamils called on the UN to create an “International Commission of Investigation into the allegations of War crimes, Crimes against Humanity and the Crime of genocide against the Tamil people in Sri Lanka” and urged the member states of the UNHRC to strengthen the current proposed draft

Permanent People’s Tribunal (PPT) has unanimously ruled that Sri Lanka is guilty of genocide, at its second high profile session in Bremen, Germany. Member former Assistant Secretary-General of the United Nations Dr Denis Haliday, as well as genocide scholars, international legal experts and activists. Haliday had also told TamilNet that the United Nations had failed the Tamils and noted the failure of the international community to act to prevent the genocide.

April 2009 – Tamil National Alliance in a statement released by its Foreign Relations Committee “The Tamil people in the island of Sri Lanka are clearly being subjected to Genocide.”

“Whoever by words, either spoken or intended to be read, or by signs, or by visible representations, or otherwise… attempts to raise discontent and dissatisfaction amongst the People of Sri Lanka, or to promote feelings of ill-will and hostility between different classes of People, shall be punished with simple imprisonment for a term which may extend to two years”.

People cannot make lose and unverifiable statements using very powerful words that are now picked up by international media and a host of others who without bothering to find out the truth are simply parroting these words and it has caused much pain of mind to the Sinhalese and it is time such ugly practices stop.